Why a Black NYC Mayoral Candidate Is Giving the Left Anxiety 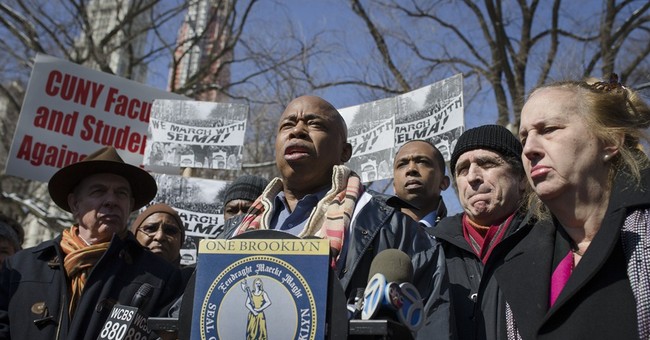 New York City could have their second black mayor in Eric Adams. It’s something you’d think that liberals would rejoice over, but there’s anxiety. He’s not the right kind of black Democrat. The Left loves to bean count how many blacks, Jews, Asians, LGBT, and other reportedly oppressed communities they support until they don’t. There is a set of rules that must be followed. Any deviation and you’re a Nazi. For Adams, he has ties to the real estate interests of the city and he’s a former police officer. He’s virtually a white supremacist already, right? The Nation probably captured the trepidation a lot of liberals have regarding Adams, who seems the clear frontrunner to clinch the Democratic nomination. We won’t know for a few weeks, but he’s a solid ten points ahead. Barring something miraculous, he’s probably going to be the Democrats’ mayoral candidate this Fall (via The Nation):

Adams presents a greater challenge for the left precisely because he is both hostile to its policy goals and well-positioned to claim, with his own base of support, that he never needs to carry them out. The two most powerful industries in New York are finance and real estate, and the latter is particularly well-wired into the Adams campaign. Adams has raised millions from developers and has promised to pursue a real estate–friendly agenda. Part of that will be ensuring that landlord-friendly policy decisions, like hiking rent on rent-stabilized apartments, are pursued with vigor.

It is not hard to imagine Adams enacting a hyper-capitalist housing agenda in the mold of Bloomberg, the billionaire mayor who once likened New York to a luxury product. Bloomberg strove to aggressively upzone working-class neighborhoods with market-rate condos while capping growth in wealthier, whiter areas. He did not believe in tenant protections, only policies that could enable developers to build and landlords to profit.

Adams is a Democrat, with deep ties to local political parties, unions, churches, and working people who know him from his years as borough president. These ties, especially in the outer borough Black neighborhoods of Brooklyn and Queens, will allow him to deflect and neutralize the inevitable movements against him. New York City is now home to an ascendant left, with DSA and organizations like the Working Families Party driving the local and state legislatures to take populist positions. Adams would be as well-positioned as anyone—outside of perhaps Governor Andrew Cuomo himself—to foil and frustrate these ambitions.

Mayor Eric Adams will have every tool at his disposal to crack down on left activists and politicians and their attendant organizations. Like Cuomo, he can marry labor with big real estate in a bid to tamp down progressive challenges—that was how the governor, for almost a decade, allowed the state Senate to be controlled by Republicans. The old Democratic machines no longer have much get-out-the-vote strength in the city, but their fixers will grow far wealthier in an Adams administration.

Adams will be able to effectively ignore most demands made from progressives. If he wins, he will owe them nothing, having assembled his own traditional and durable coalition. De Blasio, once an activist politician himself, felt pressure from the left quite directly, and often had to take into account their demands in order to position himself for the national spotlight he so craved. Adams has no plausible presidential aspirations. For his supporters and backers, this is a plus. For everyone else, it will be a very long four to eight years. If progressives can’t have their candidate in Gracie Mansion—maybe Maya Wiley wins, maybe she doesn’t—they can at least hope for someone who can be bent and pressured, forced to take movement demands into account.

So, first, a lot of this stuff is just a byproduct of single-party rule and machine politics. Second, he’s not communist enough. Is that what’s wrong with Adams? He’s also someone who won’t kowtow to the progressive mob. So, yeah, I guess if you’re a leftist, this isn’t your guy—but how dare he build a base of his own to win an election. How dare he? This speaks to the authoritarian ethos that’s ingrained in Democratic politics today. You must obey. You must do this, that, and the other, and if you don’t—you’re the enemy. There is no room for debate, nuance, or compromise. There's only submission for the greater good of some shoddy narrative constructed by the equally warped minds of white liberals on college campuses. New York City is not going to elect a Republican, so we must be realistic here. I’d take a pro-public safety, pro-business, and pro-school choice Democrat over de Blasio. It’s not a hard choice. Adams could be better on charter schools, but the two other candidates behind this guy have disaster written all over them. Let’s see what happens. One thing is for sure, the city has been wrecked by Comrade de Blasio. Maybe this Adams guy can rebuild it.