College Soccer Player: I Wasn't Woke Enough So I Was Forced off the Team 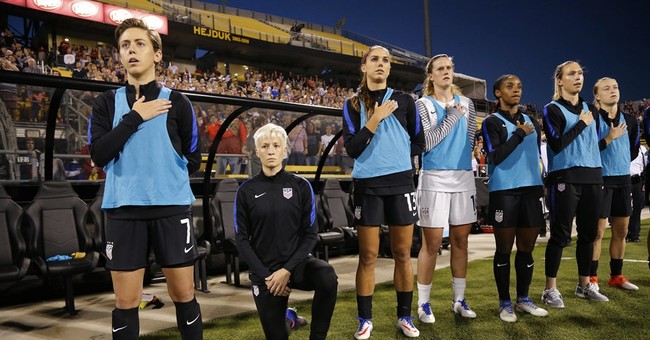 We all saw the US Women’s national team do it for years. Megan Rapinoe and others were at the forefront of kneeling for the national anthem following ex-NFL quarterback Colin Kaepernick’s example. It was the start of the woke Left’s rapid infestation into sports.

And of course, this stuff would leech into college sports, but even self-described liberals can be caught in the crossfire of the woke zealots. Remember ‘Wokeness’ is an authoritarian mindset. You must obey. You must follow EVERYTHING. If not, you’re no better than a Nazi. The gun is to your head no matter what—and nuance is dead. Kiersten Hening found that out the hard way. She’s a former member of the Virginia Tech women’s soccer team who refused to kneel for the national anthem, but she’s not a conservative. She’s a liberal who happens to support the message of Black Lives Matter, but no the organization itself. That was considered anathema to her former coach (via NY Post):

Hening, 21, was a midfielder/defender for the Hokies from 2018 to 2020. In a federal lawsuit filed last month, Hening said her former coach, Charles Adair, wasn’t a fan of her political views. According to the documents obtained by TMZ Sports, Hening said that during the peak of the Black Lives Matter movement last summer, she often disagreed with her teammates on social justice topics.

In the lawsuit, Hening said she “supports social justice and believes that black lives matter” but she said she “does not support BLM the organization.” Hening added that she disagrees with Black Lives Matter’s “tactics and core tenets of its mission statement, including defunding the police.”

Hening said during the pregame reading of a “unity statement” on Sept. 12, 2020, many of her teammates knelt before their game against Virginia, but she remained standing and she was “verbally attacked” by Adair at halftime.

Adair allegedly pointed a finger “directly in her face” and said that she was “b–tching and moaning.” Hening added that Adair said she was being selfish and individualistic for “doing her own thing.”

Adair continued to target Hening with verbal rants before benching her, the lawsuit stated. According to Hening, things got so “intolerable that she felt compelled” to leave the team.

Here is a classic example of a person who seems to trend left, but not Left enough. She supports Black Lives Matter, but the organization does have roots in cultural Marxism. And it’s not like she’s alone in criticizing this movement. Former NFL Marcellus Wiley went on an epic rant last year about BLM and parts of its message statement that seeks to wreck the nuclear family structure. Yeah, I can see how a lot of people would raise eyebrows over that. Defunding the police is also something that no one really supports wholeheartedly. The polling is there for all to read, folks, even black, and Hispanic Americans don’t want the police defunded. It’s a white liberal thing. It’s an unhinged concept. It has and will continue to cost Democrats votes.

It’s amazing that a sports commentator is willing to say about BLM what many evangelical pastors are too scared to. pic.twitter.com/QiqPYF53ta

I wish Ms. Hening the best in her legal action.