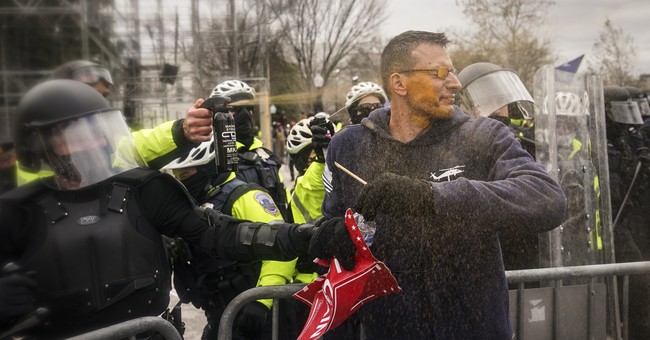 I know some folks were wondering what was going to happen with the Ashli Babbitt shooting. Babbitt was shot and killed by Capitol Police during the January 6 Capitol Hill riot. The whole incident was captured on video. It’s horrifying. The Department of Justice is said to have combed over the situation for months and finally decided that the officer who shot and killed Babbitt will not be charged (via Associated Press):

Federal prosecutors will not charge a police officer who shot and killed a woman as she climbed through the broken part of a door during the insurrection at the U.S. Capitol on Jan. 6, the Justice Department said Wednesday.

Authorities had considered for months whether criminal charges were appropriate for the Capitol Police officer who fatally shot Ashli Babbitt, a 35-year-old Air Force veteran from San Diego. The department’s decision, though expected, officially closes out the investigation.

Prosecutors said they had reviewed video of the shooting, along with statements from the officer involved and other officers and witnesses, examined physical evidence from the scene and reviewed the autopsy results.

“Based on that investigation, officials determined that there is insufficient evidence to support a criminal prosecution,” the department said in a statement.

Capitol Police were overwhelmed, and the protesters were trespassing on federal property. The safety of Vice President Mike Pence, the congressional leadership, and other members of Congress was at stake. In that situation, yes, the likelihood of you getting shot by police inside the building increases.

Congress was verifying the results of the 2020 election that day. At the same time, these rioters aren’t representative of the 74 million people who supported Donald Trump. And this incident was more grounded in Congress not doing their job for decades, along with the unresolved questions about voter fraud during the 2020 election.

Babbitt was a struggling business owner who took out a high-interest loan to keep her pool cleaning enterprise afloat during COVID. She hailed from deep-blue California. She had voted for Obama. In these tense times, people act drastically different. It’s not an endorsement of what happened on January 6. It is what it is. It happened. And Congress being more concerned about fundraising off their political theater that goes nowhere plays a big part in what’s wrong with DC.