Yes, What the Japanese Are About to Do...Is How We Got Godzilla 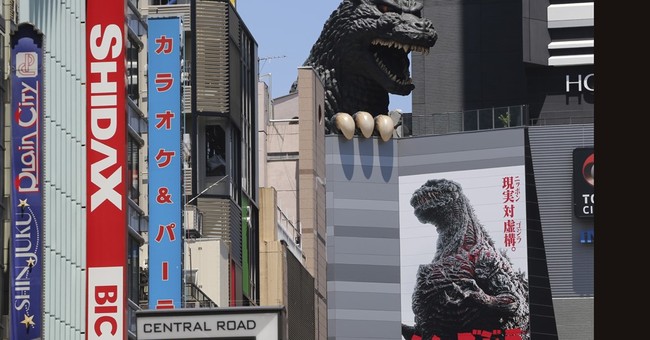 When I first read this, I thought it was a joke. The Japanese are going to release radioactive water from the Fukushima reactor into the sea—and it’s totally fine, say the experts. Yeah, you read that right. We’re going to release radioactive water into the environment. As Barstool Sports Network aptly noted, “This is how we got Godzilla.” Not everyone is in agreement. The Japanese fisheries are totally opposed to this plan, along with a host of other local environmental groups. I mean, wouldn’t you. China and South Korea have also expressed their opposition to releasing toxic water back into the sea (via Associated Press):

BREAKING: Japanese government will release treated Fukushima nuclear power plant water into the sea. The International Atomic Energy Agency says there will be no negative impact on humans or the environment.

This is how we get Godzilla https://t.co/mnIrXqxPGl

Prime Minister Yoshihide Suga said the ocean release was the most realistic option and that disposing the water is needed to complete the decades-long decommissioning of the Fukushima plant. He said the government would work to make sure the water is safe and to help local agriculture, fisheries and tourism.

The plant’s operator, Tokyo Electric Power Co., and government officials say tritium, which is not harmful in small amounts, cannot be removed from the water, but all other selected radionuclides can be reduced to releasable levels. Some scientists say the long-term impact on marine life from low-dose exposure to such large volumes of water is unknown.

Japan Fisheries Cooperatives chairman Hiroshi Kishi said the decision less than a week after he met with Suga “trampled on” all Japanese fisheries operators.

Japan’s Nuclear Regulation Authority chairman Toyoshi Fuketa has repeatedly called for a ocean discharge, saying a controlled release of the adequately treated water would pose no human or environmental harm.

Koo Yun-cheol, minister of South Korea’s Office for Government Policy Coordination, said the plan was “absolutely unacceptable” and urged Japan to disclose how the water is treated and its safety is verified. South Korea has banned seafood imports from parts of Japan since 2013 and could increase those steps.

China criticized Japan’s decision as “extremely irresponsible,” saying it had not considered the health concerns of neighboring countries.

Yeah, I’d be freaking out if radioactive water was poured into the sea. If this goes through, be on the lookout for ship disappearances. That was the first sign of the monster’s existence.

Recommended
Sen Hawley Destroys Biden Energy Secretary on Soaring Gas Prices
Spencer Brown
Share this on Facebook
Tweet
Did Joe Scarborough Forget He Sponsored a Resolution Against Rev. Al Sharpton?
Rebecca Downs
When It Comes to Economic Success That's Happening, Let's Not Forget It's in the Red States
Rebecca Downs
18 Senators Call to Defund Biden Disinformation Board
Sarah Arnold
Wells Fargo Whistleblower Claims Bank Held ‘fake interviews’ For Diversity Efforts
Sarah Arnold
Should We Be Worried That Bill Barr Is Going to Cooperate With the January 6 Commission...Allegedly?
Matt Vespa
Did a Late ABC News Reporter Warn Us About the Dems' Growing Abortion Extremism Back in 2012?