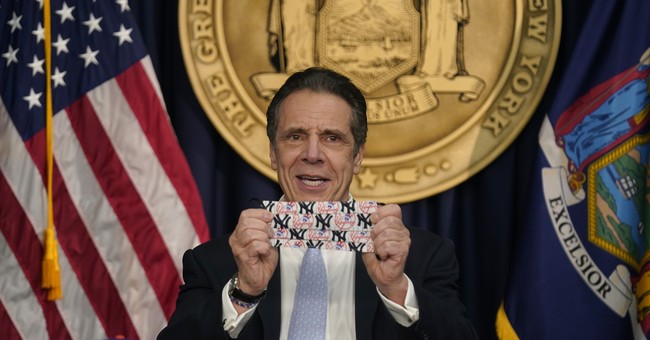 I know New York Gov. Andrew Cuomo is probably breathing a sigh of relief. There have been overreactions to the J&J vaccine, mass shootings, the Masters golf tournament, and other news stories that have diverted attention away from his alleged gropey creepiness and the fact that he cooked the books regarding the state’s COVID death toll. The ongoing story from Albany is that the numbers in the July 2020 report could not be verified or something. Well, new documents show that Mr. Cuomo and his goons were indeed tracking all COVID deaths from nursing homes since April of 2020 (via Fox News):

New York Gov. Andrew Cuomo’s administration was tracking the location of nursing home residents who died of COVID-19 since at least April 2020, despite officials’ claims that those numbers could not be "verified" for a report issued months later.

The revelation comes in a new Department of Health document obtained exclusively by Fox News. According to the document, nursing homes were required to submit the number of residents who died from COVID-19 at least once daily.

"A new field has been added under the CURRENT Resident Death Details section of the form," reads a portion of the form, beneath the words "UPDATE (04/19/20)". "The new field will collect the resident's Place of Death and is required for all resident deaths you are reporting in that section."

The document raises new questions about the Cuomo administration’s decision to exclude key details from a July 2020 report about COVID-19 in nursing homes. According to the New York Times, senior officials including the governor’s top aide intervened to exclude thousands of nursing home deaths before the report was released, including out-of-facility deaths.

The report was not updated to include those deaths until February 2021, following a damning report from Attorney General Leticia James and a lawsuit from the Empire Center, a nonprofit think tank.

Cuomo forced COVID-positive patients to be admitted into these nursing homes and thousands died because of it. The New York Attorney General’s Office noted that this nursing home order likely spread the disease. It also said that the governor had undercounted the real number of COVID deaths in nursing homes by 50 percent. He issued an idiotic executive order for nursing homes. Thousands died. And then he tried to cover it up. this is impeachable at the very least and possible criminal at worst. Cuomo should be torched, but as with many Democratic politicians—he’s going to get away with it.