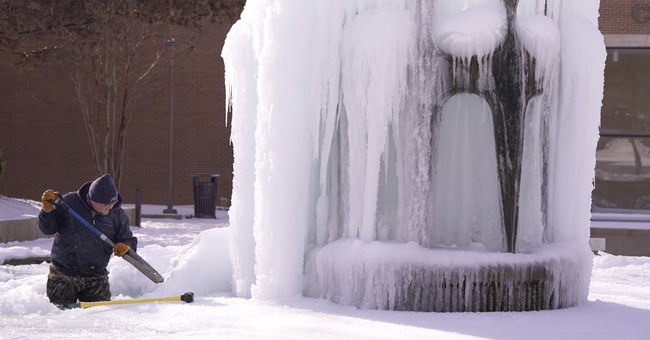 Texas is still trying to get its power grid back in working order, but questions and investigations will probably occur once the state is past this energy debacle. The Electric Reliability Council of Texas (ERCOT), which manages most of the state’s power grid, has been besieged as millions lost their electricity during the brutal Presidents’ Day winter storm. As Texans endure the brutal temperatures, we’ve had tragic stories of carbon monoxide poisoning as residents turn to unconventional measures to stay warm. A woman and child died when they left their car running to heat their home. Another family needed emergency services after they brought a charcoal grill into the house. This is a historic storm. For the first time, Texas issued a statewide winter storm warning.

The debate over how this disaster happened has already been aired. The wind turbines that contributed around 42 percent of the state’s power prior to the storm have frozen. Leah covered this issue earlier this week. The Wall Street Journal noted how this form of energy policy only leads ironically to green freezes. You need to have backup systems. There are none. Well, there is nuclear, which is carbon-emission free and can generate tons of power—but greenies don’t want it. I know you already know this, but when you get down into the details, the environmental Left just wanted to make us poorer and control the means of production. It’s a backdoor to communism. These folks are quite open about it now. Anyway, I digress.

There’s a lot of finger-pointing that will occur, but with a failure like this caused by bad government policy—everyone shares a part of it. While the Texas energy crisis is bad, it could have been much worse. Reports are saying the state was mere “seconds and minutes” away from total catastrophe. I’m talking Venezuela-style energy problems, with total blackouts lasting for months (via Texas Tribune):

Texas’ power grid was “seconds and minutes” away from a catastrophic failure that could have left Texans in the dark for months, officials with the entity that operates the grid said Thursday.

As millions of customers throughout the state begin to have power restored after days of massive blackouts, officials with the Electric Reliability Council of Texas, or ERCOT, which operates the power grid that covers most of the state, said Texas was dangerously close to a worst-case scenario: uncontrolled blackouts across the state.

The quick decision that grid operators made in the early hours of Monday morning to begin what was intended to be rolling blackouts — but lasted days for millions of Texans — occurred because operators were seeing warning signs that massive amounts of energy supply was dropping off the grid.

It needed to be addressed immediately," said Bill Magness, president of ERCOT. “It was seconds and minutes [from possible failure] given the amount of generation that was coming off the system.”

Grid operators had to act quickly to cut the amount of power distributed, Magness said, because if they had waited, “then what happens in that next minute might be that three more [power generation] units come offline, and then you’re sunk.”

Magness said on Wednesday that if operators had not acted in that moment, the state could have suffered blackouts that “could have occurred for months,” and left Texas in an “indeterminately long” crisis.

While generators rapidly dropped off the grid as the weather worsened, operators monitored the difference between the supply of power on the grid and the demand for that power. As supply dwindled and demand grew, the margin narrowed to more and more dangerous levels, forcing grid operators to enact emergency protocols to either increase supply or decrease demand.

If the grid had gone totally offline, the physical damage to power infrastructure from overwhelming the grid could have taken months to repair, said Bernadette Johnson, senior vice president of power and renewables at Enverus, an oil and gas software and information company headquartered in Austin.

“As chaotic as it was, the whole grid could’ve been in blackout,” she said. “ERCOT is getting a lot of heat, but the fact that it wasn’t worse is because of those grid operators.”

One angry with ERCOT, and I know there are many, would definitely see this piece as one defending the council. For sure, it does seem like this piece runs interference for them, especially as Gov. Greg Abbott has called on the heads for ERCOT to resign along with investigations into how this calamity hit the state. For now, all we can do is wait. For Texans, all they can do is be patient and hope power is restored throughout soon. Stay safe out there.