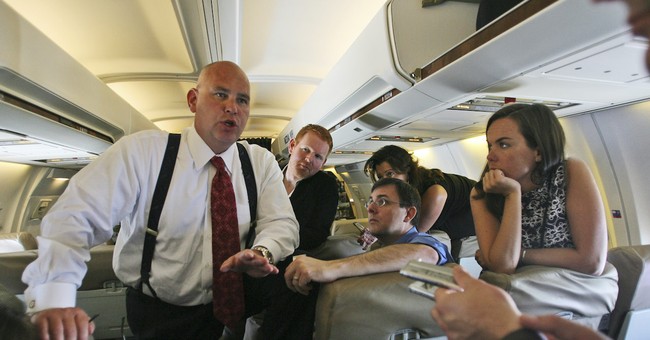 Trump may be gone, but Trumpism will remain an entrenched element of the Republican Party. The GOP traitors at the Lincoln Project who wanted to purge that element are finished. In a couple of weeks, the group that vowed to soldier on after its co-founder, John Weaver, was ensnared in a web of sexual misconduct, has folded. Everyone resigned as dozens of young men came forward about how Weaver had harassed them through private messages. Some of them were as young as 14 when contact was made.

FBI is investigating allegations against Lincoln Project co-founder John Weaver, according to two sources who told me they were contacted by FBI agents. Sources were asked if Weaver ever behaved inappropriately toward them when they were underagehttps://t.co/kaWoLIL6Gu

NEW from me: Lincoln Project co-founder John Weaver used his power to get jobs for young men he allegedly harassed. His colleagues were warned. https://t.co/MdxlblUrFG

The FBI is investigating those communications. To make matters worse, it seems very unlikely that no one knew about Weaver’s creepiness. He’s the co-founder. These people knew. These were the people who supposedly had the honor and integrity to conserve conservatism. They were all scum. And what about the money? The group raised some $90 million but no one really knows where it all went, and new relationships are drawing more scrutiny into how this project managed its finances. Take this relationship with Obama’s former staffers that was up until recently undisclosed. Now, is this shocking? No. In fact, Jennifer Van Laar documented this alliance over the weekend at our sister site, RedState. It looks like even the liberal media is now covering and confirming the report (via CNBC):

Since then, it has spent $1.1 million on independent expenditures in those races and paid Steve Schmidt $1.5 million. https://t.co/BT5roJBmCt pic.twitter.com/mCS1B7wsxF

The anti-Trump Lincoln Project paid a consulting firm run by former Obama deputy press secretary Bill Burton to conduct a Black voter outreach program in Pennsylvania, which turned out to be the decisive state in the 2020 election.

The super PAC paid $1.5 million to the firm, BG Causes LLC, during the 2020 election cycle, according to data from the nonpartisan Center for Responsive Politics. Federal Election Commission filings show that the two $750,000 checks sent to BG Causes in October were intended for “voter outreach services.”

The relationship between Burton’s firm and the Lincoln Project had not been reported. It is the latest glimpse into the financial dealings of the super PAC, which was founded by Republicans and conservatives who were dedicated to defeating former President Donald Trump in 2020.

The anti-Trump group has come under scrutiny after one of its co-founders, John Weaver, was accused of sexual misconduct. Several people, including critics and supporters of the group, have since been calling for transparency on its finances.

Burton has past ties to Schmidt as the two advised former Starbucks CEO Howard Schultz when he was considering an independent run for president. Schmidt recently stepped down from Lincoln Project’s board.

Conway, who is no longer with the group, tweeted on Wednesday “there must still be accountability and transparency for the handling of the Weaver fiasco, as well as of [LP’s] finances.”

Good @AP exposé proving what what was already obvious:

1) @ProjectLincoln lied when it denied knowing of complaints about John Weaver’s sexual misconduct;

2) It was a massive financial scam to enrich its founders at the expense of gullible liberals.https://t.co/k6lFrgqzS4 pic.twitter.com/U6RRKIEPdO

The people heralded on MSNBC & CNN as heroic figures of great integrity and conscience were, all along, exploiting and manipulating liberals' fears to fleece them out of cash in the middle of a pandemic & unemployment crisis to get themselves out of debt & buy now homes & boats. pic.twitter.com/nlShplSKCY

For quite some time, people thought this was a grift operation assembled by disgruntled GOP operatives who couldn’t handle that Trump won the election. Well, more and more those assumptions appear to be proven true. I mean, co-founder Steve Schmidt has made some fine real estate purchases.