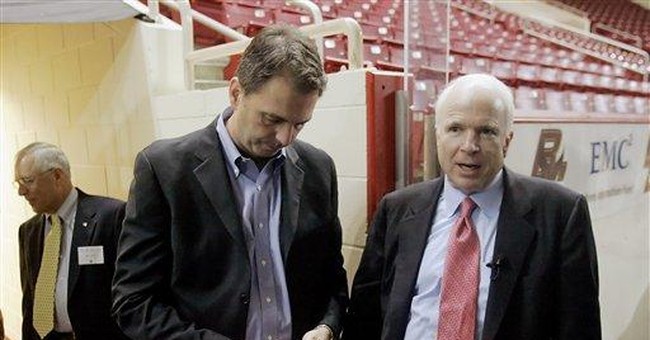 Did you hear the news? A bunch of former Republican officials is mulling creating an anti-Trump third party. It’s no shock that the Establishment is just as unhinged as the anti-Trump Left. I mean, just look at the activities of The Lincoln Project and other groups that are conserving conservatism — whatever that means. There is nothing Republican or conservative about becoming prostitutes for the Democratic Party. Period. Also, why? There is a bunch of overlap between traditional Reagan conservatism and populist leaning Trumpism on a host of key issues. Both sides want smaller government, fewer regulations, fewer taxes, a strong military, are against political correctness, pro-free speech, and are cheerleaders for America. We’re patriots. I really don’t see why some ex-GOP folk are doing this other than failing to recognize that they’ve been relegated to the kids’ table since they didn’t do their job for years and disrespected the voters. You’re on the outs because you suck. You failed. And no one listens to you because of that. That’s your fault, fellas. This whole proposal reeks of a GOP elitist vanity project from a group of folks who do not get that it’s not their party anymore. And in their anger, they’ve decided to go down the path of trying to split the conservative vote, which will only benefit Democrats in elections (via Reuters) [emphasis mine]:

Dozens of former Republican officials, who view the party as unwilling to stand up to former President Donald Trump and his attempts to undermine U.S. democracy, are in talks to form a center-right breakaway party, four people involved in the discussions told Reuters.

More than 120 of them held a Zoom call last Friday to discuss the breakaway group, which would run on a platform of “principled conservatism,” including adherence to the Constitution and the rule of law - ideas those involved say have been trashed by Trump.

The plan would be to run candidates in some races but also to endorse center-right candidates in others, be they Republicans, independents or Democrats, the people say.

Evan McMullin, who was chief policy director for the House Republican Conference and ran as an independent in the 2016 presidential election, told Reuters that he co-hosted the Zoom call with former officials concerned about Trump’s grip on Republicans and the nativist turn the party has taken.

What a bunch of losers. Any ship with McMuffin is bound to sink — and no one should be throwing life jackets to these clowns. Before COVID, Donald Trump created millions of jobs, sent the markets into overdrive for the American economy, cut taxes, reduced regulations, overhauled the entire judiciary, and put three conservative jurists on the Supreme Court to give us a solid 5-4 majority; Chief Justice Roberts doesn’t count as part of this wing anymore. He started no new wars. We have Middle East peace deals hashed out between Israel and her key Arab neighbors in the region. I don’t see what’s wrong with this at all. Oh, and Trump did what Democrats won’t do for the next four years: take on China.

But that’s all bad because Trump is a mean tweeter or something. Also, "principles."

Again, isn’t it odd that all of the activities from these "principled" anti-Trump Republicans only end up helping the Left? This push has a serious messaging and public image issue. The face of the anti-Trump GOP, the folks who have done all the work in fighting Trump is The Lincoln Project, which has been engulfed in a sex scandal after its co-founder was caught exchanging job opportunities for sex with dozens of young men. The Lincoln Project has seen mass resignations in the wake of this fiasco. The Lincoln Project is now claiming that no one really knew Weaver, which is ridiculous. He’s the co-founder, folks. You’re not going to pivot away from this, you sick, sick puppies. I mean, it’s sort of hard to get off the ground with a project as big as a third political party that can compete when the co-founder of the most visible and active anti-Trump group, which has raised tens of millions of dollars, was messaging 14-year-olds.

NEW from me: Lincoln Project co-founder John Weaver used his power to get jobs for young men he allegedly harassed. His colleagues were warned. https://t.co/MdxlblUrFG

Yeah, even the Associated Press is noting how The Lincoln Project is a total fiasco now:

Led by several prominent former Republican consultants, its slickly produced ads attacking President Donald Trump made it perhaps the best known of the so-called Never Trump organizations. The group tried to claim a higher moral ground in an effort to purge Trump from the GOP. Money flowed in by the tens of millions of dollars from donors eager to help.

But within the organization, a crisis was brewing.

In June 2020, members of the organization’s leadership were informed in writing and in subsequent phone calls of at least 10 specific allegations of harassment against co-founder John Weaver, including two involving Lincoln Project employees, according to multiple people with direct knowledge of the situation. The email and phone calls raise questions about the Lincoln Project’s statement last month that it was “shocked” when accusations surfaced publicly this year. It’s also the first known suggestion that Weaver targeted a Lincoln Project staffer.

Despite the early warning, the group took no action against Weaver and pressed forward with its high-profile work. For the collection of GOP consultants and former officials, being anti-Trump was becoming very good for business. Of the $90 million Lincoln Project has raised, more than $50 million has gone to firms controlled by the group’s leaders.

There is no evidence that the Lincoln Project buried the allegations against Weaver for business reasons. But taken together, the harassment allegations and new revelations about spending practices raise significant questions about the management of one of the highest-profile antagonists of Trump. The revelations threaten the stature of not just the Lincoln Project but the broader coalition of establishment-oriented Republican groups working to excise Trump from the party.

The Washington Blade reported earlier this week details of another set of internal communications over the summer indicating that Lincoln Project leaders were aware of allegations against Weaver and preparing to respond to media reports.

The allegations against Weaver followed a similar pattern in which the 61-year-old married father of two would allegedly send private messages to young gay men on Twitter. They often began with references to work before shifting to things like their personal appearance, workout routines and favorite sexual positions.

And the Associated Press also went into the alleged shady dynamics of LP’s super PAC. Again, isn’t it rather curious how those touting the principles and character line are usually the biggest d-bags in the business? Say what you will about Trump, he was not shy about his past deeds. We all knew. That’s the point. We’re not shocked. Did he screw around with porn stars? Who cares if he did? Also, he’s a billionaire. I would be more shocked if he didn’t. These folks tried to portray themselves as the moral beacons of the GOP and are just the lowest forms of trash on earth. They’re making hit lists of ex-Trump officials in what will certainly evolve into a harassment campaign. And now this stuff? And these guys want to take on Trumpism in the GOP.

We may not need to do much to relegate these faux-Republicans into the ash heap.