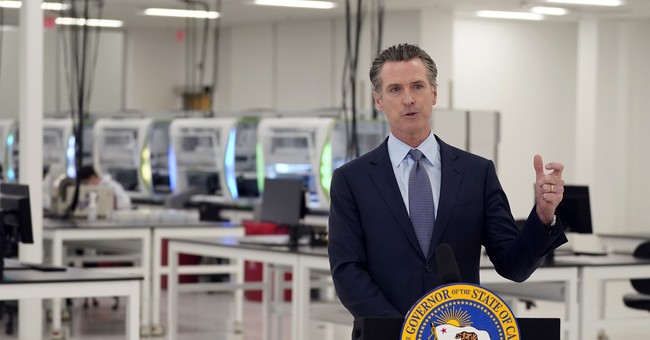 California Governor Gavin Newsom was Mr. Lockdown. The Golden State has some of the most stringent COVID protocols. There are mask mandates with near-universal compliance — and the state still got rocked hard by the virus. Over the holidays, the state saw nearly a million cases in six weeks. The national caseload would have dropped if it weren’t for the California spike. It’s a disaster, and it undercuts the narrative once again on the effectiveness of lockdowns and mask-wearing. It also should deliver a death blow to the shuttering of bars, gyms, restaurants, hair salons, and barbershops, as all those locations are low-risk low-transmission locations. Keeping us inside is what’s killing us, but Newsom locked up the parks. He also instituted the lockdowns while absconding to Napa for a fancy dinner with friends and a bunch of doctors. There were no masks and no social distancing.

Are we shocked that there’s a recall effort against Newsom? Reportedly the recall Gavin folks have collected some 1.2 million signatures thus far. That’s getting very close to the 1.45 million-requirement and they have several weeks to go. Maybe that explains why he’s rushing to re-open schools in the state, even if all the teachers are not vaccinated. King Gavin's running scared. Look, when one of the most liberal cities in the country says it's going to sue its own school district to get kids back to learning, you know you’re sitting on a political bomb (via San Francisco Chronicle):

Schools can safely move to reopen even if teachers are not all vaccinated, Newsom says https://t.co/fl5A5OMQQ0

Schools can safely move to reopen even if teachers are not all vaccinated, Newsom says https://t.co/K1qAF9cDkM pic.twitter.com/lZ3569eCeO

California Gov. Gavin Newsom said in a Wednesday press briefing that reopening schools "with an appropriate level of safety and support" is a top priority as the holiday surge shows promising signs of subsiding.

The governor said he believes schools can return to in-person instruction as teachers begin to receive their vaccinations. His statements came on the day the Chronicle reported the city of San Francisco would sue its own school district to force campuses to reopen.

In response to a question about some teachers' unions calling for vaccines as a prerequisite to returning to classrooms, Newsom said the state is prioritizing teachers in its vaccine process, with education staff falling in Phase 1B, the category of essential workers.

This also comes after Biden’s director for the Centers for Disease Control and Prevention said it was safe to re-open schools. Vacation is over, teachers. Time to get back to work like the rest of us. For Gavin, well, he’s sprinting to save his room at the governor’s mansion for sure with these moves. And I thought Democratic governors were the aces in handling COVID. Give it time, folks. It all ends up being a massive pile of incompetency that leads to people’s deaths. Andrew Cuomo knows that all too well.