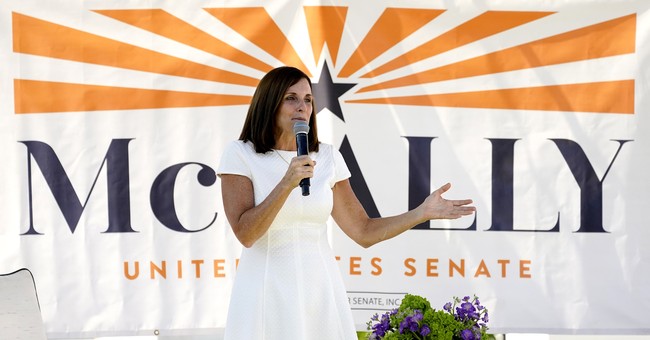 Well, this is not a great shock. I don’t think there was ever a poll where McSally was leading. At any rate, McSally, who was appointed to fill the vacancy left by the late Sen. John McCain, appears to have been defeated by Mark Kelly, husband of former Rep. Gabby Giffords.

Arizona is a notoriously hard state to campaign statewide. You have the main cities, plus the countless little communities that dot the rest of the state. While McSally’s backstory is commendable, she’s proven to be not an ace when it comes to campaigning. She also reportedly hired the same folks who ran her first failed 2018 Senate run.

CNN projects Martha McSally will lose her Senate race to Mark Kelly, now giving Democrats a net pickup of one seat. McSally, who was appointed to the seat, has now lost races for both of her state’s Senate seats in two consecutive election cycles

This is a Democratic pick-up for the U.S. Senate. All eyes are now on Georgia, where it looks like both seats will head into a runoff. If Republicans keep the Senate, with their gains in the House, it will be a nice firewall against the most insane items on the Biden agenda.

"With nearly all the votes counted, I called Mark Kelly this morning to congratulate him on winning this race. I also offered support in his transition to ensure Arizonans are best served during this time. I wish him all the best.

It has been an absolute honor to fight for and serve Arizona in the U.S. Senate, especially during these unprecedented times. Thanks to Governor Ducey for giving me this extraordinary opportunity to serve. I will always be inspired by the strength, resilience, innovation, and compassion that I witnessed from Arizonans as I traveled throughout our great state. I will never forget what I learned from all of you.

I will miss engaging with Arizonans to hear their challenges and how I could help when I deployed to D.C. I am so grateful for the opportunity to solve many problems through legislation, secure funding and pandemic relief for Arizona, deliver results to constituents getting the run around from bureaucracies, and fight for the hardworking people of our amazing state.

While falling short, I am deeply humbled to have received the second most votes ever cast by Arizonans for a statewide race. I am thankful for the more than 1.6 million Arizonans who voted for me and everyone who dedicated their time, resources, and prayers to our campaign. Like nearly everything in my life, it was a high-risk, high-purpose fight. Thank you to all my faithful wingmen and wingwomen. I am proud of our effort, as we truly left it all out on the field.

After fighting for our country for more than three decades—the last nine in the political arena—I trust God will lead me to my next mission to make a difference after I get a little rest.

Thank you, Arizona! It's been an honor to serve you, and I know our future is bright and blessed.”

Joe Bye-Done: WaPo's Article About Biden's Struggles Sure Does Drive a Dagger Into His Presidency
Townhall
'Let's talk about age of consent': CA state senator's bill would lower the COVID vaccine age of consent to 12 from 18
Twitchy
Does Justice Sotomayor's Intemperate Rant at Her Colleagues Indicate That She Knows Roe v. Wade Is About to Be Overturned?
Redstate
Meet 'Dr. Tarece' — and Pray for the Families in Georgia's Largest School District
PJ Media