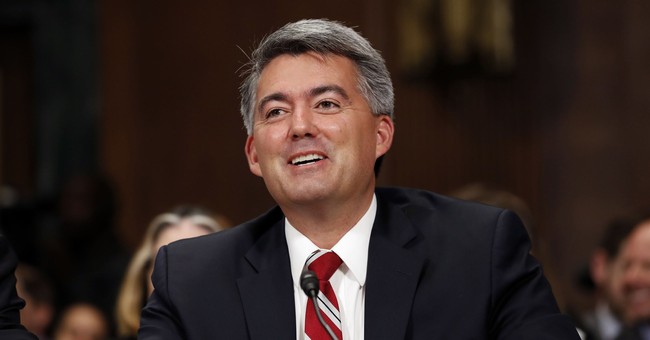 Well, this was an ‘as expected’ result, but it still sucks. Republican Sen. Cory Gardner has failed to win a second term, falling to former Gov. John Hickenlooper. Right now, with just 30 percent of the votes tallied, Hickenlooper leads Gardner by almost 40 points—60/40. Again, no shock, but a couple of days ago, The Colorado Sun zeroed in on why Gardner should probably get ready to update his resume:

In the U.S. Senate race, Hickenlooper holds the advantage at 53% compared to 42% for Republican incumbent Cory Gardner. The margin of error for the poll — which was conducted Thursday through Sunday in partnership with OnSight Public Affairs — is plus or minus 4.4 percentage points.

“Biden and Hickenlooper’s numbers appear to be moving closer together, which means that as Coloradans cast their vote they are most likely to vote the same way in both races,” said Chris Keating, the pollster. “I wouldn’t be surprised if the Senate and presidential numbers in Colorado are very similar on election night.”

The latest numbers echo other Colorado polls in recent months showing both Democrats at the top of the ballot with solid leads. The polling averages since September show Biden ahead 12 points and Hickenlooper up 9 points, according to The Colorado Sun’s poll tracker.

Hickenlooper leads Gardner 54% to 36% among unaffiliated voters, the poll found. He also is running up the score in liberal enclaves like Denver and Boulder.

Gardner wants to outperform Trump, but the latest numbers show they are locked in similar places.

“The progressive part of Colorado gets Hickenlooper, and this type of vote lead makes it impossible for Gardner to win, particularly when Hickenlooper also wins suburban voters by 19 points,” Keating said.

Fox projects that Dem John Hickenlooper will defeat GOP CO Sen Cory Gardner. First pickup of the night for Dems in their quest to win the Senate

Cory Gardner loses, A sad day. Gardner is great, but could not swim against the tide of his state. Hope this is not his last race.

Thanks @CoryGardner for standing with Amy Coney Barrett.

The state party is also a mess. It just was not a good situation for Gardner. Maybe in a non-presidential year, things could have been different, but alas, you cannot win them all. Gardner did leave his mark on history though; he voted to confirm Justice Amy Coney Barrett.

“Please understand to all the people who supported our efforts tonight that his success is Colorado’s success, and our nation and our state need him to succeed. We need to be united together.”#copolitics #COsen https://t.co/U7VnNUG76m