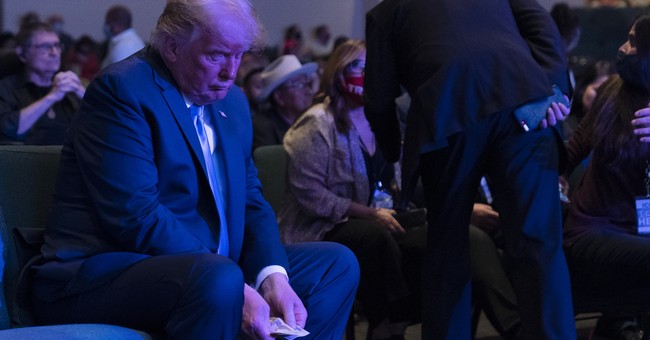 How is this a story? President Trump attended a church service in Las Vegas and he whipped out some cash for the offering. This is not earth-shattering news. This isn’t really a story. We all do this. When I attended mass, there was a time when he collected the cash. I did so personally as an usher, so why are some outlets tweeting clips of Trump taking some dollar bills out as if this is something that’s newsworthy or worse—uncommon. For godless heathens, maybe this is weird, but it once again shows the disconnect the media has with almost everyone. They may not like it, but we are still the most religious of the industrialized world. Beyond the secular concrete jungles of the cities, people go to Sunday service and they give money for the offerings. This isn’t Mars, you idiots.

President Trump received an outpouring of blessings at church in Las Vegas on Sunday morning.

Thank you to every American who is praying for the president! ?? pic.twitter.com/QCYoQ7qUBn

The president reached into his pocket and made a cash donation during the portion of the service where the congregation is asked for tithing. pic.twitter.com/g7VP7Tjzkm

So I had to jump to meme generator for a minute. pic.twitter.com/7P7qsC34Qn

And yet, you clowns wonder why no one likes you, trusts you, or listens to you. It’s because you’re unworthy of respect. You deserve to be spit on; you’re de facto operatives for the Democratic Party. And again, you people with the mask fetish. If you’re more worried about masks during Trump events than you are when liberals have their mass gatherings and act insane and violent, then you just gave the reason why no one listens to you. We’re done.

Thousands are now marching in DC for the #WomensMarch pic.twitter.com/btdMnFhbYo