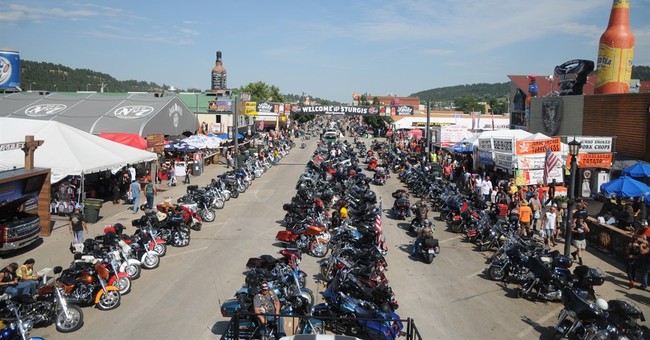 Bronson covered this last month. Remember that motorcycle rally in Sturgis, South Dakota. The media warned this could be a so-called “super-spreader” event. The mecca of COVID, right? Well, that’s what they ran with, pinning some 250,000 new cases on this rally. And they used some study that—you guessed it—has been shredded as shoddy, inaccurate, and all-around total garbage. The Wall Street Journal editorial board ripped into this study, the media hysterics, and the explicit hypocrisy regarding how the media become mask fetishists and COVID ‘Karens’ when normal people hold rallies in support of Trump or wanting to reopen their businesses. Yeah, the horror, right?

And yet, there is deafening silence when left-wing rioters loot, commit arson, and assault police officers. These people are protesting for social justice, police reform, and against racism. That makes their rioting ok. It makes their violence ok…because when you’re fighting racism, which I’ve been told by the experts is just as bad as COVID, the virus becomes non-transmissible. Is anyone really shocked why no one listens to the elites anymore? When you peddle this woke nonsense as medical expertise, you’re finished. But let’s get to how Sturgis became ground zero for this non-spike in COVID cases (via WSJ) [emphasis mine]:

Holy Hell’s Angels. Last month’s motorcycle rally among the deplorables in Sturgis, South Dakota, contributed to 266,796 Covid-19 cases and $12.2 billion in public-health costs—or so claims a new study widely flogged by the media. Here is another example of how flawed statistical models can generate grossly exaggerated projections.

The annual 10-day rally with live performances, races and bike shows drew 460,000 Americans from around the country to the small town of Sturgis (population: 7,000). South Dakota is among the few states that never imposed a shelter-in-place order or face-mask mandate. It has also let restaurants and bars operate without restrictions.

Never fear, the modelers as always are here. San Diego State University’s Center for Health Economics & Policy Studies sought to quantify the rally’s Covid impact in South Dakota and nationwide by analyzing the (anonymous) cell-phone data of attendees. They then compared case trends in counties with high, moderate and low numbers of attendees.

They found that cases increased by 3.6 to 3.9 per 1,000 in South Dakota in the three weeks after the rally, translating to between 3,185 and 3,441 more cases statewide. To put this number in perspective, New York state has recorded as many cases in the last week even with its stringent public-health rules.

But many “high inflow” counties like Los Angeles, Maricopa (Arizona), Clark (Nevada) and El Paso were experiencing flare-ups before the rally. These counties may have shared other characteristics like higher population density that contributed to their increases. There could be other “endogenous” variables—for instance, counties with more people who attended the motorcycle rally may also have had populations less observant of social distancing.

The study’s authors nonetheless assign each of these 266,796 Covid cases a public-health cost of $46,000—ergo $12.2 billion—though the vast majority of all virus cases are mild or moderate. Talk about a case study in statistical overreach—and double standards.

This isn’t the first COVID study that’s been debunked. Imperial College London, which plunged the world into panic mode over the virus, especially in the US, where they projected the death toll to be at least 2.2 million, was grounded in an analysis of just six flights leaving Wuhan. There’s more to debunking in an excellent Twitter thread that further shreds the study.

So, it’s par for the course again regarding the media and COVID. When will we be able to trust these people again?