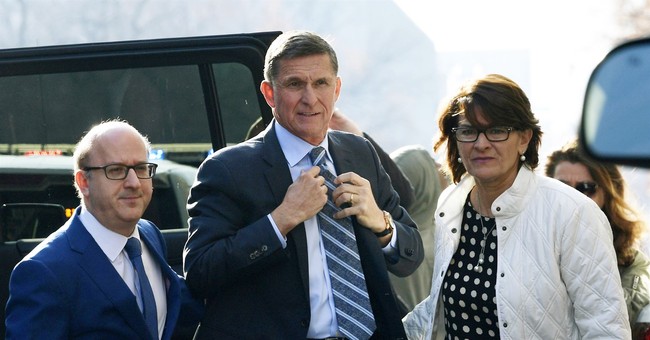 Former National Security Adviser Michael Flynn’s legal circus is an American disgrace. It’s a circus. The man is innocent of the Russian collusion charges. He’s not a Russian agent. The phone calls he had with then-Russian Ambassador Sergey Kislyak were run-of-the-mill and not out of the ordinary; even disgraced ex-FBI chief James Comey said they were legit. The Obama Department of Justice drafted a memo six days after his January 2017 interview with the FBI. It exonerated Flynn of being a Russian spy. The agents who interviewed him also said that they didn’t feel he lied to them. Now, the 302 report for that interview is, well, another saga in itself.

For now, there is no case. There is no prosecution; the prosecutor has resigned, and the DOJ has filed a motion to dismiss the criminal charges, which it has every right to do. Judge Emmet Sullivan refuses to drop the case. The biased judge who called Flynn a traitor in open court has to be eating tons of crow, especially since that DOJ motion contains a lengthy history of prosecutorial misconduct on behalf of the FBI, DOJ, and James Comey. These Obama folks were out to get Flynn no matter what.

The appeals circuit dealt Flynn’s team a setback, noting that Sullivan can hear arguments to dismiss the case. Yet, he originally set forth the resolution of this issue until after the election. That was probably Sullivan’s game plan the entire time. Run out the clock regarding the 2020 election and hope a Democrat wins in November. Then, a Democrat-run DOJ nixes the motion to drop the criminal charges in the Flynn case.

Yet, the Flynn legal team isn’t willing to let the former general remain in legal purgatory anymore. They’re filing a motion to expedite the hearing regarding this case. It’s set for September 29. Fingers crossed.

The DOJ motion to dismiss is set for oral argument on September 29 at 11:00 am.

Flynn update - the DOJ and Flynn have filed a motion to expedite the resolution of the case.

The parties "agree that this Court should resolve the pending motion to dismiss with dispatch."