Was the Judge Who Struck Down CA’s Magazine Law a ‘Rooftop Korean’? 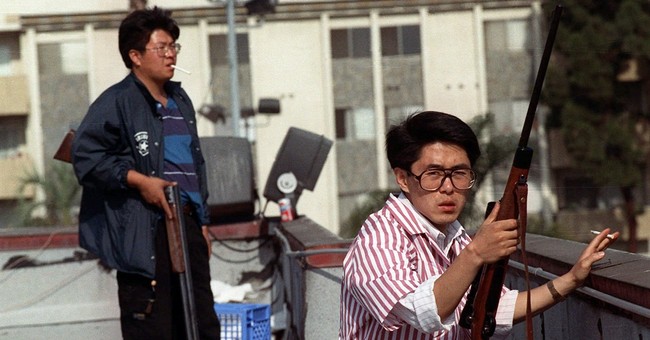 Well, this would be pretty awesome if true. Let’s go back to this ruling which is one of the biggest in recent memory. We all know anti-gun liberals can’t push for gun confiscation. They push for things that get the ground moving on that, however, with universal background checks, background checks for ammunition, and bans on so-called high-capacity magazines. The anti-gun Left has scored some wins here, but in the usual deep blue states. Yet, as Bronson wrote earlier this month, the California Ninth Circuit, known for being hyper-liberal, overturned the state’s ban on such magazines:

The Second Amendment scored a victory in court ... The 9th Circuit Court of Appeals invalidated a California ban on so-called large-capacity magazines (LCM) that hold more than 10 rounds of ammunition.

The three-judge panel ruled that California's ban "substantially burdened core Second Amendment rights" and "struck at the core of law-abiding citizens to self-defend by banning LCM possession within the home." The ban makes about half of all gun magazines in the country illegal to own in California and other states with similar bans on LCMs.

"This is a huge win for the NRA and gun owners nationwide," NRA spokesperson Amy Hunter said in a statement. "The 9th Circuit, which isn't often a favorable court for gun owners, ruled it is unconstitutional to place arbitrary bans on magazines that hold more than 10 rounds."

Ken Lee, the judge on the 9th circuit who wrote the majority opinion striking down California's magazine ban, was one of the Roof Koreans.

Guys, Kenneth Lee was 16 during the LA riots. He very likely was present, and very likely helped in the defense of his parents shop, not I don't think he's the famous Rooftop Korean in the red polo from the pictures.

Judge Kenneth Lee, a Trump appointee, was on the panel who torched this provision. It shows how the president has changed the judiciary, notably flipping the Ninth Circuit and other appeals courts during his first term. It matters. Hey, have you noticed that liberal state attorneys general are done with the national injunction nonsense regarding Trump’s executive orders? Anyway, there was a rumor that Judge Lee was a “rooftop Korean.”  The name was given to the many Korean immigrant business owners who did one of the most indelibly American things during the destructive LA Riots in 1992—protect their livelihoods. When it became clear that law enforcement was overwhelmed and no help was coming, Korean-language radio tracked the destructive mob engulfing the city and urged business owners to grab their guns and barricade their businesses. The police never came. Was Judge Lee one of them? He grew up in Koreatown after his family fled South Korea following the 1979 military coup. It’s very possible, but that’s the best we can get right now. Dr. Kevin Pham of Heritage Foundation wrote, “Kenneth Lee was 16 during the LA riots. He very likely was present, and very likely helped in the defense of his parents' shop, not I don't think he's the famous Rooftop Korean in the red polo from the pictures.”

Look, if Judge Lee was a “rooftop Korean,” that’s a major bonus. It’s badass, but striking down the so-called high capacity magazine law is just as good.