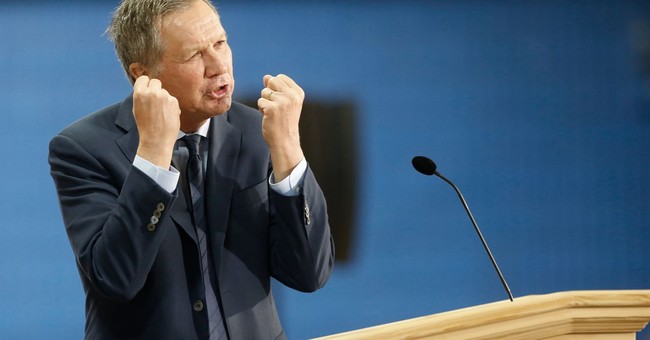 Dude, what are you smoking? Seriously, I mean what the hell is this? You were already on the outs with the party, Mr. Kasich. And now, you’re not only endorsing Joe Biden for president—you’re speaking at their convention. I don’t know what is going through Kasich’s mind—I don’t. Does he think that somehow, after a Biden win, the GOP will go back to the days of old? Those days are gone. They’re over. Finished. All of those people who were uncomfortable with Trump have either retired or resigned. The Republican Party is now a right-wing populist party. And if you were paying attention, it’s a party that still mostly advocates close to 90 percent of what the old Reagan coalition has advocated for in the past 25 years. The delivery isn’t as polished sure—but who cares. Trump gets results. I’m a proud Trump Republican as is most of the base. Yes, there are some annoying folks who yearn for past days. They can still hop on the Trump train. Well, everyone can still do that, except John Kasich who is speaking tonight at the Democratic National Convention to break tribalism or something (via NYT):

Four years ago, John R. Kasich considered it unthinkable to vote for Donald J. Trump for president, yet he could not bring himself to cast a ballot for Hillary Clinton either — so he wrote in Senator John McCain of Arizona.

Not this time around. Mr. Kasich, a lifelong Republican who has spent decades in politics — as a state legislator, congressman, governor of Ohio and presidential aspirant — will become his party’s most prominent leader to cross the partisan divide and support former Vice President Joseph R. Biden Jr., speaking at this week’s Democratic National Convention, and then voting for him this fall.

“I wasn’t going to vote for somebody else,” Mr. Kasich said in an interview before his speech on Monday night. “I just wasn’t going to do it this time. I did it the last time. You know, I had always been hopeful, even after the convention and after the election, that perhaps we would see a change in the president, but we just never have. I happen to think it’s the soul of our country that is being damaged, and that’s what I’m concerned about.”

Mr. Kasich said he remains a Republican and acknowledged that he has deep disagreements with Mr. Biden on issues, but said that individual policy differences are less important than the broader crisis confronting the country.

“Somebody has to start being willing to break down this tribalism,” he said. “I don’t think that I will achieve that, but somebody’s got to start. Somebody has to be able to begin to say, ‘No, you’ve got to take off your partisan hat, and you’ve got to realize we’re Americans.’”

John Kasich is speaking at the DNCC tonight. As part of his pre-speech media blitz, he's slamming @aoc, one of our rising stars. *So* glad we gave the anti-choice union buster a prime speaking slot. I'm sure it will sway at least five voters. https://t.co/Z4V833ep2P pic.twitter.com/oW5muL9cLN

We can build bridges & not lose sight of our values.

It’s important to remember that Kasich is an anti-choice extremist. He 100% will (and has) signed away our reproductive rights the moment he has the opportunity to do so. He is not a friend to workers.https://t.co/7S8504VZcK

According to the DNC's new list, there are now more Republicans speaking on the first day alone than there are Latinx Democrats speaking across the entire four day convention. https://t.co/quXNIEhJ68

It’s infuriating that the DNC believes that to win this election they need to win over Republicans who don’t like Trump rather than convincing a massive base of young progressives to vote.

There is absolutely no rationale for this strategy except for simply hating progressives.

Can someone explain Meg Whitman's presence on a Democratic convention stage to me in a way that makes sense?

Mike Bloomberg, John Kasich, Pete Buttigieg and 60 seconds of pre-recorded, officially approved AOC is in fact the perfect representation of the Dem party.

REPUBLICAN John Kasich is getting more time to speak at the DEMOCRATIC national Convention than @AOC. That is all.

So, to break down tribalism, we should…vote for a person who I oppose on almost every issue whose base is fueled by a left-wing authoritarian ethos? That sounds idiotic. That sounds downright stupid. That sounds like the type of logic which explains why these Kasich Republicans have been wiped out and need to leech onto…Democrats in a desperate, pathetic attempt to remain relevant. Kasich is a clown. He’s a traitor to the party. And after tonight, he should be thrown in the trash. Also, not even Democrats want him there. The base of the party does not want him there, and there is an issue regarding how he’s getting speaking time, whereas Alexandria Ocasio-Cortez was only afforded a 60-second pre-recorded message. Oh, and he took swipes at her as well. AOC is the future of the Democratic Party whether we like it or not, and this guy thinks bashing a base favorite is the way to go. It's a total train wreck and provides another reason for why maybe Kasich should've just disappeared from politics forever after 2016.

In the words of Frank Underwood, Kasich needs to be cleaved from the herd and left to die in the wilderness…politically speaking. Tonight is the swan song for a total and complete clown who will not be missed.

RT if you agree that American women deserve better than John Kasich. pic.twitter.com/grZ2DibN4F

In 2012, John Kasich said Joe Biden is a liar. pic.twitter.com/ep8eUQUHal

Share this on Facebook
Tweet
Nuclear Secrets? Latest Update on FBI's Ransacking of Mar-a-Lago Is Beyond Laughable
Matt Vespa
'There's No Use Pretending I Scored Some Major Victory': Kinzinger Admits He Failed to Save GOP From Trump
Leah Barkoukis
Polling Begins to Show What Voters Think of Manchin Caving on Dems' Massive Spending Bill
Leah Barkoukis
It Turns Out Beto O'Rourke Doesn't Like It When People Interrupt HIS Events
Rebecca Downs
The Democrats: Serial Gaslighters
Guy Benson