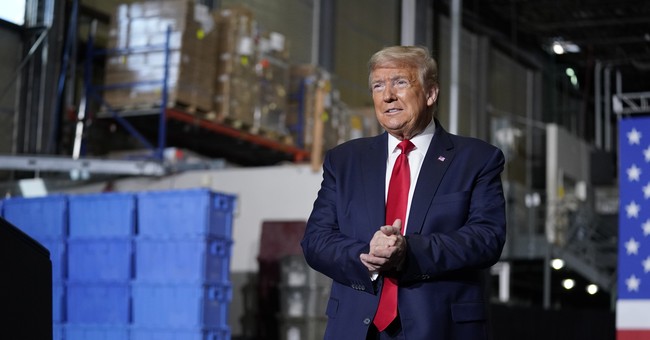 President Donald Trump dropped some news this afternoon. He’s taking hydroxychloroquine at the recommendation of the White House physician. He’s been taking it for a week-and-a-half now. He’s not infected with the virus, but he’s taking it as a precaution since he’s the president and sees scores of people every day.

"A lot of good things have come out about the hydroxy." @realDonaldTrump says he is taking hydroxychloroquine.

Trump asked what the evidence is that hydroxychloroquine helps re coronavirus.

"Here’s the evidence, I get a lot of positive calls about it."

President Trump says he has been taking hydroxychloroquine and zinc for the last two weeks.

BREAKING: President Trump says he has been taking Hydroxychloroquine.

“You’d be surprised at how many people are taking it... I happen to be taking it.” pic.twitter.com/DMW0i145OF

President Trump says he’s taking hydroxychloroquine and started a couple of weeks ago.

There’s going to be liberal media hysterics. You know it’s coming. Right now, the halls of MSNBC, especially that of the Rachel Maddow show, are cooking up some InfoWars-lite conspiracy theory about Trump possibly having it and covering it up.

Why did Trump do this? Well, one could see him trolling for a liberal media freak out. He knows they overreact, overreach, or in the end, get stories dead wrong about his administration. I wouldn’t put it past him to see if this legion of idiots, who call themselves MSNBC, CNN, ABC News, CBS News, NPR, etc., the liberal media establishment, take the bait. They will. They’re addicted to this punishment. It’s an election year. They need Joe Biden to look somewhat competent, unlike the person we see now who looks like he needs daily reminders to put on pants. Has anything really changed since 2016? The media still hates this man—and that nonsense will probably land them in trouble again. I can’t wait to see what these clowns cook up upon this news.

Also, let’s not gloss over the most important part: the president is fine. He’s not infected, though I’m sure many, many liberals hope that he contracts it because that’s the Left, that’s how they are in 2020. Pure animals.

Also, let’s not forget that 65 percent of doctors said they would prescribe hydroxychloroquine to a family member, with 66 percent saying they would take the drug themselves. Out of over 6,200 doctors surveyed worldwide from 30 different countries, this anti-malarial drug was the one they deemed the “most effective therapy” against this virus.