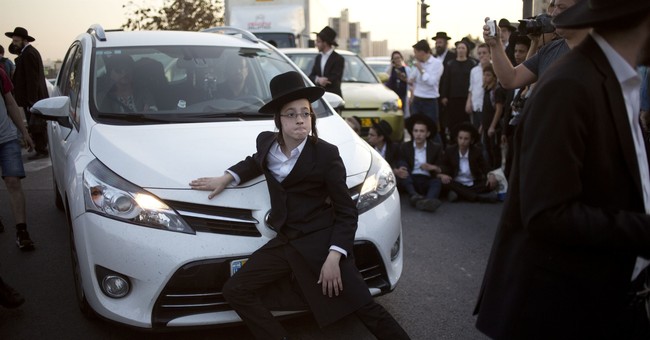 In New York City, the threat of the homeless riding in the subway stations and spreading disease was known for months. Right now, even with at least 1,400 members of the NYPD becoming infected with the Wuhan coronavirus, sweeping the subways of the homeless might be necessary, as any of them carrying the virus could threaten containment measures in the city. On the surface, it would appear as if the ultra-orthodox Jewish community is another group that could upend containment measures. And they’re paying for it. The infection rate is through the roof (via Daily Beast):

Though data is difficult to come by amid a still-surging pandemic, tight-knit Orthodox communities across New York and New Jersey have been particularly vulnerable to the novel virus, according to local medical professionals and community members. By March 19, over 500 cases of coronavirus had been identified by one urgent-care center serving ultra-Orthodox neighborhoods in Brooklyn. That on the heels of a March 17 call from the White House to 15 leading Orthodox rabbis in New York, including prominent Hasidic leaders, urging the community to shutter key institutions and adhere to social-distancing protocols.

But according to media reports and a slew of photos and video obtained by the Daily Beast, as well as sources within the community, some religious ceremonies and other gatherings have continued unabated—with potentially devastating results.

On Saturday, in Crown Heights, Brooklyn, a large group of black-coat clad young men gathered in front of the global headquarters of the hasidic sect Chabad Lubavitch to convene a prayer quorum, according to a video published by Vos Iz Neias. On Sunday, in the ultra-Orthodox enclave of Lakewood, New Jersey, nearly 50 people were discovered by police gathering outside a private home. At least three weddings have reportedly been broken up in the area in recent weeks, and a funeral there sent police calling for backup Wednesday.

Bernie Gips, a coordinator with the volunteer Jewish community EMS service Hatzolah in Borough Park for nearly 46 years, said he was frustrated by the public perception that the ultra-Orthodox community was not taking the coronavirus threat seriously.

“People think the Orthodox are not complying, it’s not so,” he said, detailing efforts his local Hatzolah chapter has made to spread word about the virus’ severity to those who don’t have internet access, including leaflets distributed doorstep to doorstep.

“The Hasidic community are trying their best,” said Gips, speaking from his home where he was self-quarantining. He estimated that “95 percent” of Orthodox institutions—from synagogues to kosher catering halls—are shut down at this point. And it’s worth noting early reports of anti-Semitism in response to alleged social-distancing shortcomings, including a New Jersey man charged with terroristic threats for a Facebook screed targeted at Jews.

But even if most of New York’s ultra-Orthodox communities are largely in compliance with social distancing guidelines by now, initial reluctance to act left the communities most vulnerable in harm's way, according to a former employee at a group home for women in Borough Park.

As of today, there are at least 336,000 Wuhan coronavirus cases, with the death toll rapidly approaching 10,000. Most of the cases in the U.S. are in the Tri-State area, especially in New York City.

In Israel, it’s a different story entirely, as the police are now forced to target the ultra-orthodox due to their refusal to abide by the mandates set forth by the government concerning containment. There is a ban on large gatherings and a national stay-at-home order. They’re also being told to wear face masks in public. The group’s refusal to abide by the guidelines has sparked talk about the possibility that their communities might be sealed off entirely from the rest of the population in order to contain the spread (via NYT):

Ultra-Orthodox Jews failing to comply with government instructions to contain the coronavirus are causing it to spread so quickly that Israeli officials are considering blockading entire communities to protect the wider population.

The virus is mushrooming in ultra-Orthodox communities as much as four to eight times faster than elsewhere in Israel.

In the Tel Aviv suburb of Bnei Brak, where 95 percent of the residents are ultra-Orthodox, the number of confirmed cases spiked from 267 on Friday to 571 on Tuesday. The total was nearly that of Jerusalem, whose population is four times bigger.

Although they make up only 12 percent of Israel’s population, the ultra-Orthodox account for 40 to 60 percent of the coronavirus patients at four major hospitals, hospital officials told Israeli news media. The true dimensions of the epidemic among the ultra-Orthodox can only be estimated because testing is rare.

Associated Press reported that crackdowns by police have begun:

Early this week, the streets of the central Israeli city of Bnei Brak were bustling with shoppers as ultra-Orthodox residents, obeying their religious leaders, ignored pleas to stay home in the face of the coronavirus threat.

By Friday, Bnei Brak had become the country’ worst hot spot and now resembles a ghost town. One expert estimated that nearly 40% of the city’s population might already have been infected.

The city has become a lightning rod for anger and frustration by some secular Israelis who allege insular Haredi communities — with disproportionately high numbers of confirmed cases — are undermining national efforts to contain the virus.

The crisis is rooted in a combination of factors. Israel’s ultra-Orthodox tend to live in poor, crowded neighborhoods where sickness can quickly spread. Synagogues, the centerpiece of social life, bring men together to pray and socialize in small spaces.

“I am very, very concerned that we’ll see a broader contagion in the ultra-Orthodox community and to the broader Israeli population,” said Hagai Levine, a Hebrew University professor who chairs the Israeli Association of Public Health Physicians.

In recent weeks, attempts by police to enforce quarantine orders in Bnei Brak and religious neighborhoods of Jerusalem resulted in standoffs with angry crowds. Some shouted “Nazis” as police arrested or fined violators.

Police say officers have been assaulted multiple times and several paramedics have been injured by ultra-Orthodox crowds.

Granted, like in the U.S., the publication noted that more of the ultra-Orthodox Jewish community is starting to stay home, but it's now more of a situation where the barn door has been bolted shut long after the horse has fled.

Religious freedom has become a secondary topic in all of this, as these ultra-Orthodox Jews and many devout Christians and Muslims believe that prayer is just as important in these times. And large Christian gatherings have been targeted too for violating stay-at-home orders and bans on large gatherings. In Louisiana, one pastor has been charged for hosting service with some 1,220 congregants. In Pakistan, mosques were permitted to remain open.

Freedom and security will always be a debate, whether it be curbing a pandemic or terrorism. It’s not an easy discussion, but with a virus that is highly contagious and with some spreading it without exhibiting symptoms—you can see why suspending most activities is necessary, though I’m open to hearing opinions to the contrary. There is also no doubt the governments will be using this crisis to expand powers beyond the scope of what’s appropriate. Violating the rights of citizens is the government’s biggest lust, an addiction. We must all be vigilant for what is necessary, like social distancing, and what is a power grab, like banning gun sales to combat the virus.