Wuhan Coronavirus Pressers from the Trump WH Are Key, But This Question Should Remind Us How Awful The Press Can Be 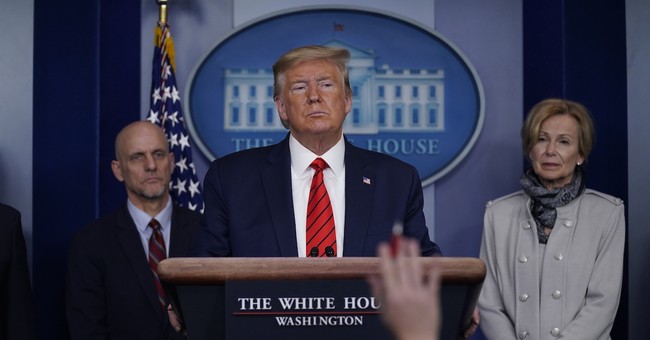 President Trump, Secretary of State Mike Pompeo, Dr. Anthony Fauci, Dr. Deborah Birx, and other members of the administration handling the Wuhan Coronavirus pandemic held another press conference, updating the American people in how the Trump White House is combating this disease. As of now, there have been over 200 deaths and over 15,000 cases. It’s a serious disease. It’s highly contagious. Young people are the age group that appears to be the best when it comes to survival rates regarding infection, but they can still get seriously ill. Older Americans, 60 years of age or older, are at very high risk of dying from this virus. Vice President Mike Pence said that tens of thousands of ventilators can be retrofitted to help those infected with the Wuhan coronavirus, but the federal government is working hard to ensure all aspects of medical supply aren’t exhausted. New protocols were announced concerning travel and trade.

But this is the liberal news media. The good news goes in one ear and out the other. They have already done a killer job in destroying the stock market gains under this administration. They want to panic to continue. It only increases the chances of Trump losing the upcoming election. They don’t care about you, folks. And Trump isn’t going to let these people run freely spewing this nonsense.

He had quite an intense exchange with NBC News’ Peter Alexander who asked what Trump would say to those who are scared.

Reporter: "What do you say to Americans who are watching you right now who are scared?"

President Trump: "I say that you're a terrible reporter, that's what I say...The American people are looking for answers, and they're looking for hope. And you're doing sensationalism..." pic.twitter.com/TJXw43CkUO

In 2009, Swine Flu infected 60 million Americans and killed 12,000. The seasonal flu infects tens of millions of Americans every year. This year, we’re projected to have 32-49 million Americans infected by the flu, with 18-50,000 deaths. Not saying the Wuhan virus isn’t serious, but we’re nowhere near these numbers yet. And NBC News wants to start a panic. It’s a double-edged sword. We need these pressers, but we also have to deal with the nonsense from the liberal news media, the enemies of the people, who appear to be rooting for failure.

The question Alexander asked was goofy: “Is your impulse to put a positive spin on things maybe giving Americans a false sense of hope and misrepresenting your preparedness right now.”

You expect the reply to be what, yes Peter, they should be terrified? It’s a dumb question.

wHy arE yOU kEEping cALM anD TrYinG to kEEp aMeriCANs cALm?

The gist of that question.