As Promised, Duncan Hunter To Resign From Congress Amid Charges Of Stealing Campaign Funds 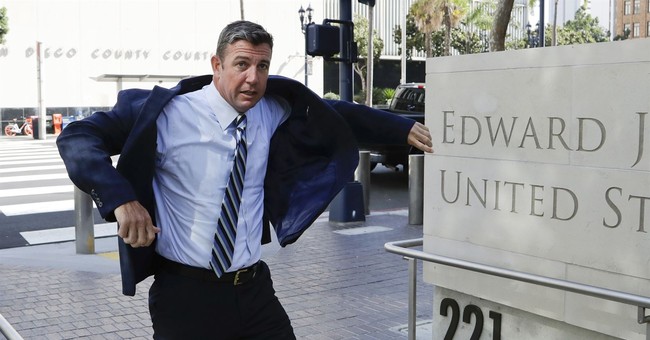 Well, the holiday season has come and gone, which means it’s time to say goodbye to Rep. Duncan Hunter (R-CA). The California Republican pleaded guilty to stealing hundreds of thousands of dollars in campaign funds for personal use. The Department of Justice investigation and subsequent indictment engulfed the congressman during the summer leading into the 2018 midterms. Hunter won re-election handily, but Hunter’s position was untenable. He also reportedly tried to throw his wife under the bus for these antics.

U.S. Representative Duncan D. Hunter pleaded guilty in federal court today to the major count in his indictment, admitting that he knowingly and willfully stole hundreds of thousands of dollars in campaign funds that he and his wife used to maintain their lifestyle.

According to the plea agreement, Hunter and his wife, Margaret, who pleaded guilty in June 2019, illegally converted more than $150,000 in campaign funds from 2010 through 2016 to purchase goods and services for their personal use and enjoyment, and engaged in 30 or more illegal transactions using campaign funds for personal use.

As detailed in the indictment, the Hunters stole money from the campaign for items as inconsequential as fast food, movie tickets and sneakers; as trivial as video games, Lego sets and Playdoh; as mundane as groceries, dog food,  and utilities; and as self-indulgent as luxury hotels, overseas vacations and plane tickets for their family pet rabbits, Eggburt and Cadbury – all while their family was otherwise deeply in debt.

“Congressman Duncan D. Hunter violated the trust of his supporters by diverting hundreds of thousands of dollars they donated in good faith to his reelection campaign for personal expenditures,” said Assistant U.S. Attorney David Leshner. “This was not an accounting mistake by his campaign. This was a deliberate, years-long violation of the law.

Hunter said he would resign “shortly after the holidays” when he plead guilty to the charges. He could go to prison. In 2013, former Rep. Jesse Jackson, Jr. (D-IL) plead guilty to using $750,000 in campaign funds for personal use. He was handed down a two-and-a-half-year prison sentence. Hunter will officially end his public career on January 13 (via Politico):

Rep. Duncan Hunter will officially step down from Congress next week, more than a month after the California Republican pleaded guilty to conspiracy to misuse campaign funds.

Hunter had previously said he would leave Congress after the holidays. His resignation will take effect Jan. 13, according to a copy of the letter he sent to Speaker Nancy Pelosi (D-Calif.) on Tuesday.

Perhaps the contribution I am most proud of is giving a voice to our men and women in uniform,” wrote Hunter, a Marine Corps veteran. “It has been an honor to serve the people of California’s 50th district, and I greatly appreciate the trust they have put in me over these last 11 years.”

Hunter, 43, and his wife Margaret were indicted in August 2018 for allegedly diverting $250,000 in campaign funds for personal use, including to pay for lavish family vacations and their children’s school tuition. Prosecutors also accused Hunter of using campaign cash to pursue extramarital affairs with lobbyists and congressional aides.