Why That 9/11 Ground Zero Mosque Controversy Could Return 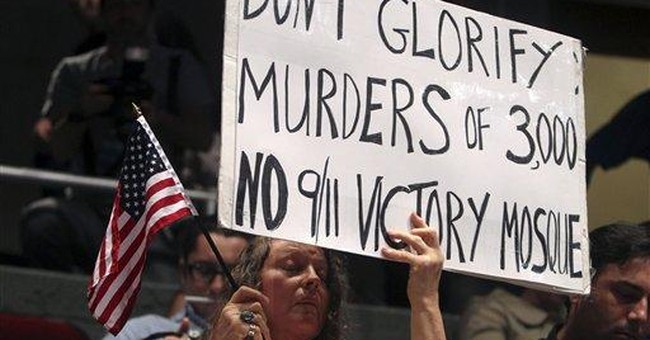 It’s been a controversial battle for years and now it could be back. Ground Zero mosque sent New York City into a tailspin, with an immense backlash that led developers to put a hold on the project. Since then, it’s gone through tweaks and changes—but it seems this development project is back on track. The building is a mere two blocks from the site of the horrific 9/11 terror attacks. Radical Islamic terrorists murdered some 3,000 Americans by flying planes into the World Trade Center and the Pentagon. United Airlines 93 Flight crashed near Shanksville, Pennsylvania after passengers bravely sacrificed their lives in an attempt to retake the plane from the hijackers. The intended target was reported to be either the White House or the Capitol Building. The whole project just seemed unseemly, but it's reared its ugly head again. Pam Geller at The American Thinker found out about this project's resurrection in New York YIMBY ("Yes In My Backyard") (via NY YIMBY):

YIMBY is counting down the 31 tallest skyscrapers under construction in New York City. Our annual list looks at projects that made a substantial amount of progress since the beginning of 2019. We start with 45 Park Place, a 43-story reinforced concrete superstructure topped out at 667 feet tall above the Manhattan neighborhood of Tribeca. The modestly slender skyscraper is designed by SOMA Architects with Ismael Leyva Architects serving as the executive and residential architect. The property is being developed by Sharif el-Gamal of Soho Properties.

Construction has also yet to begin on 51 Park Place, which is slated to become a 71-foot-tall, 16,000-square-foot Islamic cultural center.

A completion date for 45 Park Place has not been heard of, but sometime next year seems likely.

Back in 2010, Claudia Rosett of Forbes questioned the funding of this project (via Forbes):

Plans for a $100 million high-rise Islamic Center next to New York's Ground Zero are generating lots of controversy, as well as great distress among families of some of the thousands murdered in the terrorist attacks of Sept. 11, 2001. So one might suppose that the Imam spearheading this project in the name of harmony and dialogue would be more than willing to help allay fears by disclosing down to the last penny where he's getting the money. Instead, Feisal Abdul Rauf--Imam Feisal, to his followers and friends--keeps stonewalling. The questions keep multiplying.

One of those questions right now is: Where in the world is Imam Feisal?

Simply locating him this week turned into an intriguing exercise. Feisal Abdul Rauf is chairman of a tax-exempt foundation called the Cordoba Initiative, which is spearheading the nine-figure project to replace a downtown Manhattan building, damaged in the Sept. 11 attacks, with the planned Islamic Center--to be called Cordoba House. Rauf's Cordoba Initiative has an office in upper Manhattan, from which Rauf and his wife, Daisy Kahn, together with a Manhattan real estate developer, made the Cordoba House pitch approved ... by a Manhattan community board.

But when I phoned the New York offices of the Cordoba Initiative... seeking answers from Rauf about the money, a staffer told me that Rauf is in an undisclosed location somewhere overseas: "He's traveling; he's out of the country."

Could they provide a phone number abroad where I might reach him? No, I was told. He had apparently gone right off the grid: "He's unavailable at this point. He's not feeling well."

Now, that this center is back on a construction timeline, let's see how this plays out.

Editor's Note: The original post failed to link back and credit Pam Geller who wrote about this at The American Thinker. You can again read the story here. That was my mistake, folks. My apologies, especially since Geller was one of the key people who pushed back against the project from the beginning.