Could This Be The Reason Why Dick's Sporting Goods CEO Destroyed Millions Of Dollars Worth of Guns? 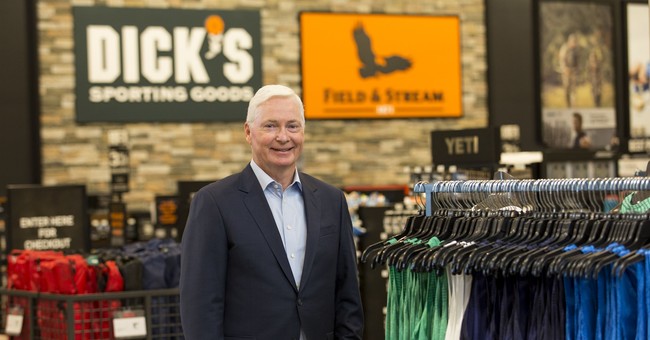 Dick’s Sporting Goods has spit in the faces of their gun-owning and hunting customer base. It started in 2012 after the shooting at Sandy Hook—and it’s continued since. First, Dick's banned sales of AR-15s, then kowtowed to the anti-gun crowd by straight-up destroying millions of dollars worth of rifles. The sporting goods giants’ political activity has cost them some $250 million in potential business, but it might be all worth it if its CEO wins the presidency. Yeah, maybe all of these moves could be a way for Ed Stack to test the 2020 waters (via Politico):

Ed Stack, the CEO of Dick’s Sporting Goods and a longtime Republican donor, is testing the waters for a possible third-party presidential bid that could scramble the dynamics of the 2020 general election.

Various messages were presented to a focus group in southern Wisconsin this week centering on the billionaire businessman, along with possible three-way match-ups against Donald Trump and Joe Biden or Elizabeth Warren.

The focus group, according to a source who took part in the testing, ran through varying themes involving Stack and heavily focused on his example of “showing leadership” by halting the sale of assault-style rifles at all of Dick’s Sporting Goods stores in the wake of the high school massacre in Parkland, Fla.

The message testing told a different story. Those in the group were shown several short videos of other candidates including Biden, Warren and former Starbucks CEO Howard Schultz — a fellow billionaire who explored a presidential bid as an independent before announcing in September that he would not run — but viewed eight or nine videos that included Stack messaging, according to a focus group participant.

The focus group member, who presented paperwork to verify participation, declined to be named.

Among the questions posed to the roughly two dozen participants: “Would you be open to voting for a third party candidate?”

Not all the feedback was positive for Stack, who is 64.

“[Focus group members] mentioned that if Biden’s getting the criticism that he looked old, Ed Stack didn’t look young either,” the participant said, adding that some felt Stack “didn’t have the charisma it would take to attract a coalition that you’d need to have a chance as a third-party candidate.”

Joe Hunter, an adviser to Gary Johnson’s Libertarian Party presidential bids in 2012 and 2016 said he has heard Stack’s “name come up” in discussions about a possible run for president.

But he cautioned about the uphill battle of landing on state ballots for any third party candidate.

Of course, there was some bad feedback, which the publication noted, even naming Stack’s advantages, notably his vast personal wealth. Starbucks CEO Howard Schultz floated a third-party run, much to the horror of Democrats. It was not successful. And there are far more people who favor gun rights than shredding the Second Amendment when you throw out the trash liberal media polls and get down to the nuts and bolts of it. Riding the artificial energy of the anti-gun crowd won’t usher you into the White House.