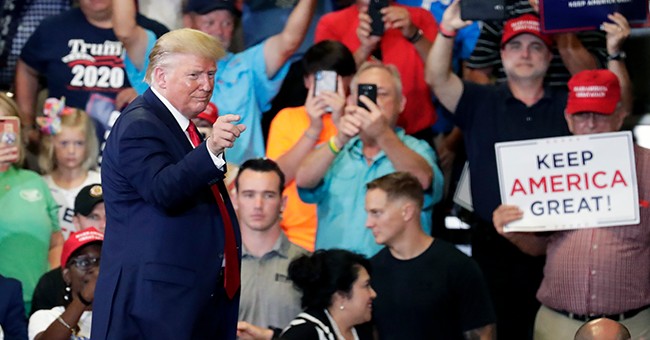 The anti-Trump media was disappointed last night. They were hoping that Democrat Dan McCready could clinch the ninth congressional district in North Carolina over Republican Dan Bishop. President Trump held a rally on Monday before Election Day to gin up support. It worked. Bishop won. Yet, the media was ready to peddle the "Trump is going to get pummeled 400-plus days before the 2020 election because of a congressional race loss" narrative. You all know that. It looks like they’re going to have to tuck that away. The race is a re-do from the 2018 election cycle; there were legitimate concerns of voter fraud. Now, this chapter is closed. The Republicans won but leave it to The New York Times to find a way to bash Trump. Here’s their headline: “With Trump Hungry for Credit, Advisers Brag About North Carolina Win.”

President Trump’s top advisers claimed credit Wednesday for a Republican’s narrow victory in a special House election in North Carolina the night before, even as Democratic and Republican officials alike said Dan Bishop’s two-point win in a district Mr. Trump easily carried only underscored how the widening urban-rural divide is complicating 2020 for both parties.

Brad Parscale, Mr. Trump’s campaign manager, told reporters on a conference call that the president’s Monday night rally in Fayetteville, N.C., was pivotal to Mr. Bishop’s success in energizing Election Day voters after the Democrats mobilized many of their supporters to cast early ballots.

“There’s no question that he is the congressman-elect this morning because of the personal efforts of President Trump,” Mr. Parscale said of Mr. Bishop.

Mr. Parscale’s victory lap was conducted on behalf of a president who privately grumbled to several aides on Tuesday that he was not getting the credit he deserved for delivering a Republican victory in the closely watched special election.

And it came with a dose of ribbing for Democrats, who believed their nominee, Dan McCready, a Marine veteran, could eke out a win in a district Mr. Trump carried by 12 percentage points in 2016. Bill Stepien, one of Mr. Trump’s top political advisers, sarcastically congratulated Democrats for a “moral victory” before saying his party would gladly take the “actual victory.”

Rep-Elect Bishop: Trump and Pence visits “put us over the top”https://t.co/acagTajRnY pic.twitter.com/bsCe69ROF8

Here's the problem. Even Democrats understand that Trump played a role in getting his guy over the top. There’s nothing wrong with that. That’s what you do as the leader of your party. You help down-ticket candidates (via Fox News):

Democratic Congressional Campaign Committee (DCCC) Chairwoman Cheri Bustos acknowledged that the president contributed to Bishop's win, writing in a statement, "We fell an inch short tonight, but it took more than $6 million in outside Republican spending and a last-minute Trump rally" to seal Democratic candidate Dan McCready's fate in the 9th District.

McCready's campaign spent approximately $4.7 million on the race, while Bishop's spent only $1.9 million. Outside spending primarily from national party committees helped Bishop to the tune of $5.8 million, though, compared to McCready's roughly $1.4 million.

The clean sweep heartened the president, who has long emphasized the national implications at stake. Trump unloaded on McCready in the fiery rally on Monday night, telling attendees that "to stop the far-left, you must vote in tomorrow's special election."

The Democratic National Committee is debt-ridden. The Trump campaign and the Republicans are flushed with cash. And it looks like, to no one’s surprise, that they’re creating a monster voter turnout machine, especially for rural voters who have become reliably Republican (via The Hill):

New Day" anchor John Berman later asked Bash why “Democrats have shown no signs of being able to break through in those rural areas" where Trump and Republicans perform exceptionally well.

“It tells us that the unbelievably huge war chest that the Trump campaign and the RNC have been building while the Democrats fight among themselves is going to be used, and already is starting to be used, to get every single one of those rural voters out," Bash explained. "The president is the president because people came out to vote in places in the rural areas of North Carolina, Wisconsin, Michigan who hadn’t voted in some time. And if they did vote, probably they voted for a Democrat before.

"The machine that they’re building to identify those voters, get them out, is going to be enormous," she added.

Trump, who beat Democrat Hillary Clinton by 12 points in the district in 2016, held a rally in Fayetteville, N.C. on Tuesday night in an effort to push Bishop over the finish line.

The Democrats have a presidential debate tomorrow. They’re still going to claw at one another, maybe they’ll bash Obama again. Meanwhile, the Trump team is already running a general election campaign and will easily define whoever is the 2020 nominee. The Democrats’ 2020 agenda is extreme, left-wing, and unpopular. Even on health care, an issue where Democrats are viewed as more trustworthy, liberals risk losing that advantage over this Medicare for All nonsense that will torch hundreds of millions of private health care plans. Private health insurance has to go for this initiative to work. And that’s not going to bode over well. Oh, and we haven’t even rehashed their tax, regulations, green energy, and gun confiscation proposals. Four words that can describe this agenda: job-killing and illegal.