Hands To Yourself: Biden Gets Scolded For Grabbing Woman's Hands Without Her Consent 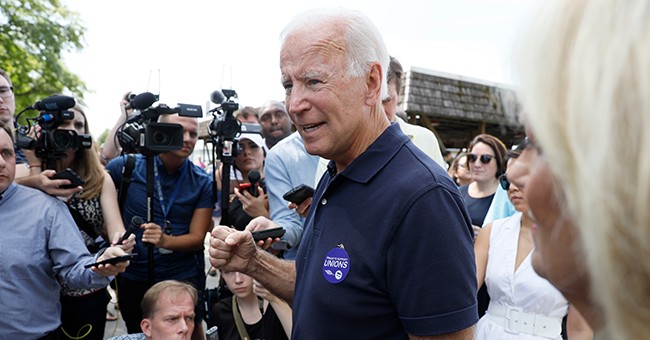 Former Vice President Joe Biden is known to be a bit…handsy at times. There are the biker chick photo and the various allegations of downright odd behavior, like reportedly smelling a lieutenant governor candidate’s hair, which created some controversy at the outset of his 2020 candidacy. Yet, there was never going to be any accountability. He’s the Democrats’ best hope to beat Trump in 2020, and even his past accusers said that his actions, while creepy, shouldn’t disqualify him from running. So, that’s the Democratic Party for you. Weaponize sexual assault/misconduct allegations, but only for use against your political enemies. Yet, at a campaign stop in Iowa, Biden also got handsy with a teacher who asked him a question about collective bargaining rights. There was no groping or anything. Yes, that should be made crystal clear; the allegations against Biden aren’t nearly as serious as those facing Harvey Weinstein, but when a woman is made uncomfortable—you need to respect the space. Biden is horrendous at that.

Roman, 41, had stopped Biden, 76, as he greeted voters on Monday during the Hawkeye Area Labor Council's Labor Day picnic in Cedar Rapids, Iowa. The North Liberty preschool teacher, who works with special needs children, was pressing the former vice president on his plans to help unionized members of her profession under recent changes to Iowa's collective bargaining laws when he reached for her hands.

"I think that he means well but, you know, he grabbed my hands right away and that was really uncomfortable," she told the Washington Examiner. "He was very close and, in my mind, I'm like, this is part of our problem: Not recognizing that you need to ask first, or can I shake your hand? Not just grab your hands and hang onto them. That bothers me."

Roman, who is leaning toward caucusing for California Sen. Kamala Harris or Massachusetts Sen. Elizabeth Warren, wanted a more detailed answer to her question about collective bargaining in Iowa, which has a restrictive framework similar to Wisconsin. It was "a very well rehearsed list" that "didn't really speak" to her inquiry, she said.

Biden has been accused by at least eight women for touching them without permission. Amid a furor over the allegations, he said that he accepted that "social norms are changing," adding: "I will be more mindful about respecting personal space in the future. That’s my responsibility and I will meet it." His wife Jill said that his inappropriate contact "won't happen again." Days after his vow to change, however, Biden joked about the allegations.

And this isn’t the only issue plaguing Joe Biden’s campaign which is going as smoothly as a bumper car. He forgot which state he was in at one stop in New England, he told a fake war story that he defended by saying the essence of it was true. The essence of a fake war story was true—okay then. Oh, and details are irrelevant to making decisions. On health care, yes, he wants Obamacare 2.0 and a public option but vowed to make sure his plan wasn’t concerned with good quality, only affordability. He also said he was vice president when the Parkland shooting occurred in Florida. Is it senility or just Joe being Joe in the sense that he always appears to have a case of diarrhea of the mouth? One thing is for sure, if this keeps up, he might not even win the nomination. These are a series of gaffes. If he does survive this primary and clinch the nomination, Trump will destroy him. Because it’s not just these errors. It’ll be him carrying the banner for a party that wants gun confiscation, open borders, health care for illegals, more regulations, and higher taxes. On the latter, everyone, especially the middle class, will have their wallets torched because that’s the only way to at least be serious about paying for his health care proposal. We haven’t even touched the green energy/Green New Scam portion.