‘You’re Going To Need To Shut Up’: One Of The Last Things This 911 Dispatch Said To A Flash Flood Victim Before She Drowned 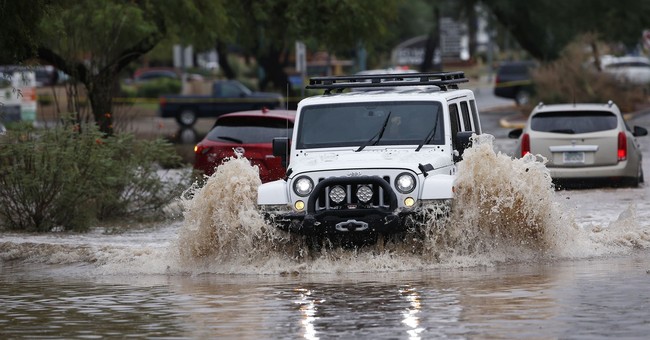 The Fort Smith Police Department in Arkansas has been engulfed in controversy after a 911 dispatcher, who has since left her position, was caught being pretty much a terrible human being to a desperate woman trapped in a flash flood. The words “calloused” and “uncaring” were used to describe the awful incident. At one point, the 911 dispatcher tells the victim to “shut up,” and that’s after she scolded her for driving in the rain.

The victim, Debra Stevens, 47, was out driving and delivering newspapers when her car got swept up in the floodwaters in the early morning hours of August 24. Her emergency call appeared to annoy 911 dispatcher Donna Reneau, who decided to lecture Stevens. Stevens later drowned. Reneau had resigned from the department prior to this incident, but it doesn’t negate the fact that her being selected as Fire Dispatcher of The Year probably should be rescinded (via WaPo):

Time was running out for Debra Stevens. But the 911 dispatcher didn’t seem concerned.

“Somebody save me!” Stevens screamed as the water level crept up inside her car, which was stranded in floodwater.

“I don’t know why you’re freaking out,” the dispatcher, Donna Reneau, responded.

Stevens did die, but only after the dispatcher told the Fort Smith, Ark., woman to “shut up,” chastised her for worrying that the phone call would cut off and berated her for driving into water — water the frantic flood victim swore she had not seen.

“Well, this will teach you,” Reneau can be heard saying in audio of the call released this week by Fort Smith police.

“All of our first responders who attempted to save Mrs. Stevens are distraught over the outcome,” interim police chief Danny Baker said in a statement. “For every one of us, saving lives is at the very core of who we are and why we do what we do.”

Reneau’s handling of the dying woman’s call led to criticism and mistrust from the public.

“After hearing one of your dispatchers this morning … I’m sick to my stomach,” one man posted on a Facebook event for an upcoming Fort Smith “Coffee with the Cops and 911 Dispatchers.”

“Don’t call 911 in Fort Smith,” another person commented under a police post promoting a Red Cross number for help with floodwaters. “They will let you die and tell you to ‘shut up,’ while you beg for help.”

Baker said the police department would have disciplined Reneau if she were still on the force, the Times Record reported. But he said he did not believe the phone call warranted firing or a criminal investigation.

He did say, however, that Reneau may have failed to convey the urgency of Stevens’s call to first responders, contributing to the woman’s death.

This isn’t the first time 911 dispatchers have been called out for their awful behavior. The list is rather extensive over the past couple of years. One woman pleaded guilty to hanging up on thousands of emergency calls in Houston, Texas. A New Mexico dispatcher was so annoyed with a mother trying to save the life of her dying son who was shot that he simply said, “deal with it yourself” before hanging up. The victim, Jaydon Chavez-Silver, died. In the D.C.-area, a dispatcher actually told a teenager to “stop whining” as her father was dying following a hit and run. That operator was later fired.  One dispatcher in Chicago told a 911 caller to stop yelling at her before hanging up. And then in Lincoln Park, Michigan, an operator hung up on a teenager whose father was having a brain seizure. The reason: she swore.

This isn’t all 911 operators of course, but there appears to be plenty who appear to be total garbage human beings and probably shouldn’t be in their positions. And it has led to tragic consequences.