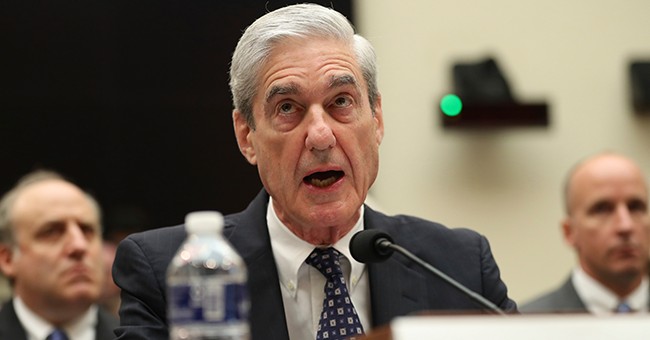 Well, the Mueller hearings are off to a solid start, and by solid, I mean a potential disaster. We all know the facts, folks. The report is public. There was no effort on behalf of the Trump administration to hinder the investigation, so out goes the obstruction narrative. And there was no evidence to link the Trump campaign colluding with the Kremlin during the 2016 election. Now, there was a little theater concerning the terms collusion and conspiracy, with ex-Special Counsel Robert Mueller saying that the two terms are not legally synonymous. That’s not what he wrote in his report. Ranking member Rep. Doug Collins (R-GA) was the one who pointed out Mueller’s inconsistency on the terms, directly citing Mueller’s report.

Mueller stumbles badly on whether “collusion” is a synonym for “conspiracy” in Russian election interference. He says no, only to have his report quoted back to him saying the words are synonymous. He then says he’ll go with what the report says.

Perhaps he forgot, but Mueller did write on page 180 of Volume I that "as defined in legal dictionaries, collusion is largely synonymous with conspiracy." Rep. Collins is correct pic.twitter.com/rW0T4SOvgI

This is a dissaster for the Democrats:

3- Mueller is constantly asking for “citations” making clear that he is not prepared.

Mueller answers “no” when asked by Ranking Member Collins if his investigation was ever curtailed or hindered at any point.

So far, Mueller appears nervous and unprepared. The Democrats will be recycling the same (trash) talking points they’ve used to prop up this manufactured product spewed out by the Democrat-media complex. It’s pathetic. The Left still cannot handle that Trump is president and if they keep this up, the man will cruise to a second term. So, if that’s the end result, please Democrats—keep throwing this tantrum.

Rep. Jim Sensenbrenner (R-WI) also noted that if there was Russian collusion, Mueller could have charged others within the president’s orbit. That was possible. He didn’t. I wonder why.