Poor Attempt At Humor? Did This Hollywood Actor Really Mean He Would Back A Nazi Over Trump? 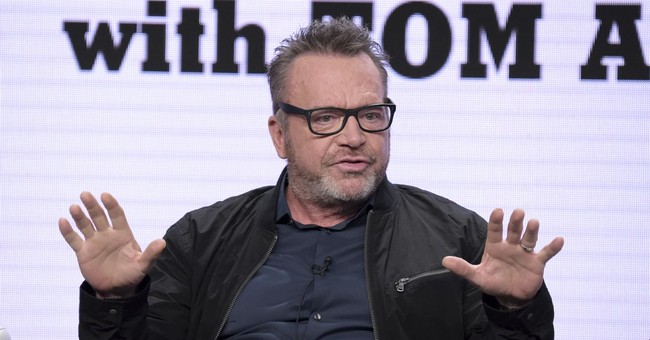 Okay, take this with a grain of salt because Tom Arnold is an actor and a comedian. You can tell where he’s semi-serious on some points. Human Events posted the video of the actor and former host of ESPN’s Best Damn Sports Show Period mucking it up with folks outside of a restaurant in Los Angeles. He speaks highly of Ben Shapiro and Michael Knowles, saying that he respects them, but does not agree with them politically. What else is new? He then goes into an anti-Trump tirade, calling Donald Trump the worst president we ever had, a traitor, and a white supremacist. Oh, and the border wall is based on racism and he’s incompetent.

Yeah, all of this is typical nonsense from the anti-Trump Left, which has been driven insane especially after the report submitted by Special Counsel Robert Mueller showed there was no Russian collusion. It was a two-year liberal media myth peddled to keep the legions of progressive frothing at the mouth. It worked. It broke their brains.

Again, Arnold is a comedian, so give a bit of leeway here. He’s also anti-Trump, so no shocker that he’s repeating the attack lines. Yet, saying Trump is so bad that he would back a Nazi before voting for Trump. Well, I’m going to say it was a swing at humor, which failed miserably. In the end, he admits he would never do that. At first, Arnold is seen being cordial with this crew assembled outside of this establishment, noting that it’s important to engage those with whom you disagree, but when you start throwing around Nazi trash, well, you lose everyone—even if it’s a poor attempt at humor (via Human Events):

Leftist actor Tom Arnold told a group of young conservatives outside Craig’s restaurant in Los Angeles that he would prefer to vote for an actual Nazi than endorse President Trump in 2020.

“I would endorse a f**king Nazi against Trump,” Arnold said to audible surprise from his sidewalk audience.

At the end, he tells the camera, “I wouldn’t really vote for a Nazi.”

Now, dialing it down for a second here’s the thing about this whole ‘Trump is evil’ tangent that has engulfed the Left. With the legions of liberal morons now being ‘woke’ to this, that, and the other in their cesspool of stupidity, one issue that also comes into play with Trump is sexual assault and harassment.

Trump is facing multiple allegations. It didn’t stop him from winning and the timing of all of these allegations is suspect. Sorry, we have an avalanche of these accusations occur in the closing days of the 2016 election? Sorry, I take into account facts, dates, and evidence before rendering judgment. The Left is Believe All Women regardless, which has landed them in trouble even before this was a thing. Does anyone remember the Duke Lacrosse fiasco? The point is for all the horror that Trump has allegedly committed against women, there is one boogeyman that will never go away for Democrats. He can’t. He was elected president of the United States twice and his name is Bill Clinton.

When sexual harassment allegations zeroed in on Democrats in 2017, with now-ex-Sen. Al Franken (D-MN) and Rep. John Conyers (D-MI) being two of the top targets, there was this epiphany with some feminists about Bill Clinton who was given a huge pass on his sexual assault history: maybe we were wrong. In fact, Clinton faced credible allegations of rape. So, here’s the thing for all the virtue signaling and the sisterhood of traveling pants crap that’s echoed from Democrats about Trump, let’s say Bill Clinton could run again and he was facing Ted Cruz, would you vote for Clinton knowing what you know and probably have known about his history of alleged sexual abuse? The answer is yes. Yes, Democrats would vote for a credibly accused rapist instead of Cruz. There is no moral high ground anymore. It’s all a massive bloody melee in the gutter, where all politics resides in the end.

Trump derangement syndrome is real and it’s hit some harder than others. Oh, and it seems that Arnold should take it easy in the allegations department as well. I mean he did accuse our senior columnist Kurt Schlichter of being a rapist on Twitter and this could carry legal penalties from the colonel.

Tom, are you calling me a rapist?
If so, are you stating - publishing - this statement as a matter of literal fact, or as an opinion?
That’s an important distinction.
Before you answer, talk to your lawyer.
Preferably one who has won a multi-million dollar libel verdict.
Like me. https://t.co/9GUxpSZR5e