'It's On Us:' Joe Biden Promises To Not Manhandle Any More Women 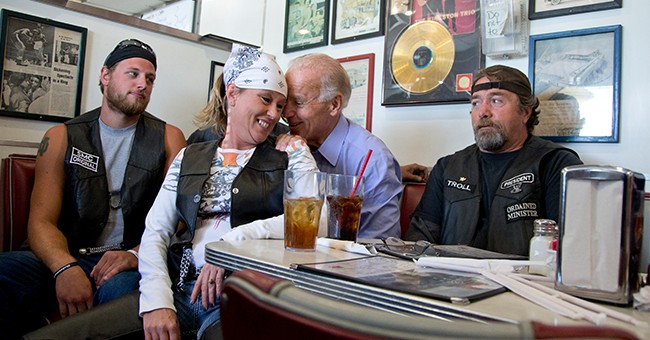 Former Vice President Joe Biden has heard the allegations lobbed against him. And he’s not sorry. He’s not letting alleged instances of being a bit too aggressive with some women hold his 2020 plans back. These aren’t allegations on par with creeps like Harvey Weinstein. Still, Biden’s overt affections, for lack of a better term, has landed him in hot water with four women who said they were more or less totally creeped out and uncomfortable with the shoulder touching, the hair sniffing, the kissing on the back of the head, and the hands being placed in the thigh region.

Yeah, say what you will, Democrats. This still could be construed as sexual harassment. And these are your rules; will you abide by them? Or will you play by the not-so-secret Democratic protocols that give political cover to your allies when they are accused of bad behavior? It could get nasty, but for now, Creepy Joe has released a video where he said that he wouldn’t manhandle women as much (via WSJ):

Social norms are changing. I understand that, and I’ve heard what these women are saying. Politics to me has always been about making connections, but I will be more mindful about respecting personal space in the future. That’s my responsibility and I will meet it. pic.twitter.com/Ya2mf5ODts

Biden has already tried to channel his inner-woke self, apologizing to Anita Hill over the Clarence Thomas Supreme Court nomination hearings and suggesting that white culture has to change, or something. He’s making himself seem more palatable to a Democratic base that’s more left wing, more politically correct, and exponentially more insane. I doubt this video will ameliorate the situation. I also doubt his horrifically transparent apology tour will garner him any brownie points with the base. For many, Joe Biden is yesterday’s news.