Is This Why Heather Nauert Withdrew From Consideration For U.N. Ambassador Post? 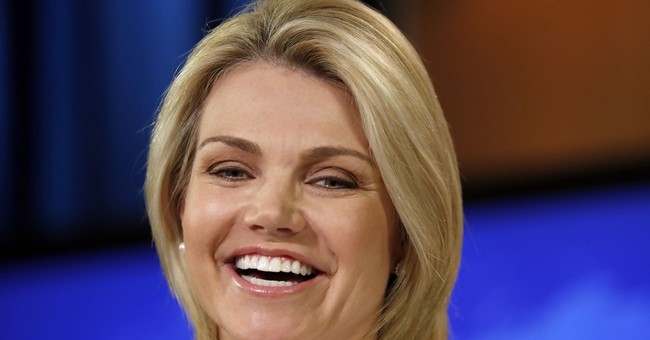 Spokesperson Heather Nauert: “I am grateful to President Trump and Secretary Pompeo for the trust they placed in me for considering me for the position of U.S. Ambassador to the United Nations. However, the past two months have been grueling for my family and therefore it is in the best interest of my family that I withdraw my name from consideration. Serving in the Administration for the past two years has been one of the highest honors of my life and I will always be grateful to the President, the Secretary, and my colleagues at the State Department for their support.”

Secretary of State Michael R. Pompeo: “Heather Nauert has performed her duties as a senior member of my team with unequalled excellence. Her personal decision today to withdraw her name from consideration to become the nominee for United States Ambassador to the United Nations is a decision for which I have great respect. I wish Heather nothing but the best in all of her future endeavors and know that she will continue to be a great representative of this nation in whatever role she finds herself.”

So, what were the family issues? Well, reportedly, Nauert had a nannygate situation, which would have made the confirmation process much more difficult. With the president’s hardcore agenda of securing the border and curbing illegal immigration, people who have reportedly hired illegal aliens as nannies cannot occupy top diplomatic posts, especially now that Trump has invoked the National Emergencies Act based on this issue (via Politico):

A person familiar with Nauert’s situation said the vetting process for her nomination hit a snag when it turned out she had previously employed a nanny who, while in the U.S. legally, didn’t have the correct work authorization. Knowing that could make her confirmation harder, Nauert withdrew.

“She didn’t want to put her family through that,” the person said, confirming similar media accounts elsewhere.

The withdrawal, which was first reported by Bloomberg, leaves President Donald Trump without an ambassador to the United Nations amid growing questions about the strength of U.S. leadership on the global stage.

Trump’s relationship with traditional allies in Western Europe is rocky due to his decision to withdraw from the Iran nuclear deal, his aggressive critiques of NATO and his occasional praise for Russian President Vladimir Putin. Trump also has said he wants to withdraw U.S. troops from Syria, raising questions about the role America will continue to play against battling the Islamic State terrorist network.

Nauert isn’t the only nominee to be sunk over illegal alien nannies. Let’s not forget that the Clinton White House had a much more damaging and humiliating incident, where two attorney general nominees, Zoe Baird, and Kimba Wood, were torpedoed over such matters. Still, Trump needs an official U.N. ambassador. We’ll see who he considers next.