VA GOV Northam On Racist Yearbook Pic: I Did Blackface In The Past, But Not In This Photo 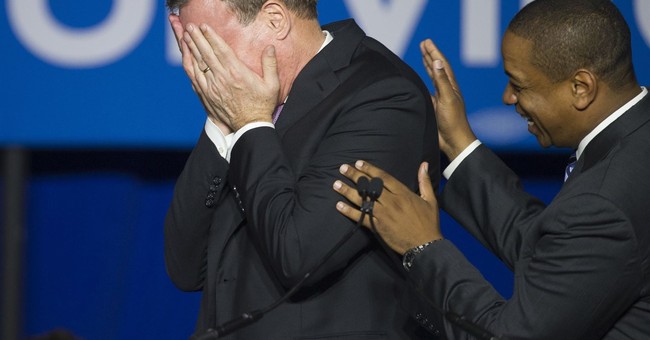 Well, that was certainly one a bizarre press conference yesterday. In the span of a day, Virginia’s Democratic Gov. Ralph Northam went from apologizing for being in a racist costume in a yearbook photo…to saying that wasn’t him in the photo, but he’s done blackface before’ he dressed up as Michael Jackson.

The defense is ‘Oh, so, I didn’t engage in blackface here, but there was another time that wasn’t pictured, so that means I can stay’ or something. Northam is adamant to not resign, saying it would be the easy way out in ducking his responsibilities, despite nearly the entirety of the liberal establishment calling on him to do so. The man ran as the anti-racist candidate for lack of a better term. And no, that doesn’t mean his Republican opponent, Ed Gillespie, was one during the 2017 gubernatorial race. The ads insinuating as much were a gross smear, but ironic in light of the recent yearbook revelation. A lot of tweets about and from Northam did not age well.

Virginia Gov. Northam: "When I was confronted with the images yesterday, I was appalled that they appeared on my page, but I believe, then and now, that I am not either of the people in that photo." pic.twitter.com/KPanPvrI3L

Gov. Northam: "That same year, I did participate in a dance contest ... in which I darkened my face as part of a Michael Jackson costume." pic.twitter.com/3RRhaWLJRY

This circus began on Friday when Northam’s 1984 yearbook page from his time at Eastern Virginia Medical School was revealed, showing two men in racist costumes. One is donning full-blown Ku Klux Klan garb while the other is in blackface. Northam issued a statement apologizing for being in that racist costume, though he didn’t specify which one. Then, on Saturday, he retracted the apology, saying it wasn’t him. As for his nickname, “coonman,” at the Virginia Military Institute, Northam said he main nickname was Goose, which started in high school. There were only two people in a class ahead of him who called him that. It ended up in the yearbook.

But let’s rewind for a second. Northam still admitted to doing blackface when he dressed up as Michael Jackson. How is that any better? How does this change the situation? It doesn’t. It is, as some noted, a slow-moving trainwreck. He’s obviously not the sharpest tool in the shed, as seen when asked if he could still do the moonwalk, it seemed for a second Northam was contemplating doing it. It was stopped when his wife leaned over saying it was not the appropriate time.

This is just surreal. Not even the Democrat-media complex can spin this. In all, who thought this press conference was a good idea?

Summary of this Ralph Northam press conference so far: It wasn't me even though last night I said it was me, also once I darkened my face to be Michael Jackson but it was for a skit, and I'm not resigning but also Lt. Gov. Justin Fairfax is ready to take over if he needs to.

Northam claims he did wear blackface to be in a Michael Jackson costume.. which he claims caused his confusion that the picture in the yearbook was him.

This is like watching a trainwreck in slow motion.

Northam now appears to be trying to get ahead of other damaging stories, says he once "darkened his face" as Michael Jackson for Halloween.

THIS IS SERIOUSLY WHAT HE SAID

The governor of Virginia engaged in racist behavior. He wore blackface in the past, but that’s not him in the racist photo on his yearbook page. But we’ll just get ahead of the Michael Jackson costume, admit it, and all will be right. You can’t make this stuff up. Not sure how liberals and members of the Democratic Party are going to take the ‘I didn’t do blackface in my yearbook photo, but I did while dressed as Michael Jackson’ explanation.