"Santa Is Back": Dow Jones Posts Biggest Single-Day Point Gain In Its History 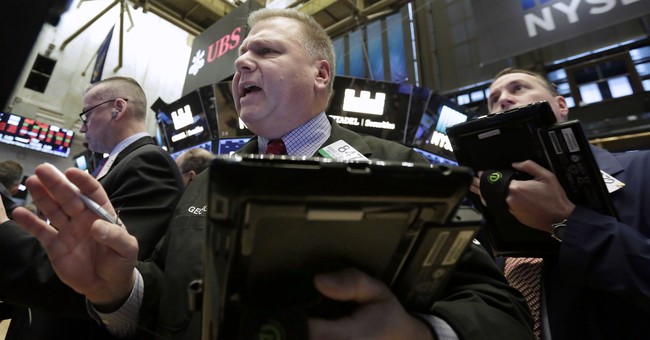 A recession is coming, they said. For many, that’s obviously not good news. For some, like the entire Democratic Party establishment, they want one in order to hurt Trump. And then prolong the economic distress by putting on a grand show, peddling trash policies riddled with regulations and high taxes…because the limousine liberal really knows the hardships of the workingman. They don’t. And even some Republicans don’t either. I live in the swamp. It’s dirty, filthy, and filled with equally appalling company. That being said, the stock market has been on a downward spiral, but history was made once again with the markets under the Trump presidency: the Dow Jones surged 1,000 points, the largest single-day point gain in its history (via WaPo):

Stocks on Wednesday climbed back from their epic Christmas Eve plunge as all three indexes posted big gains.

The Dow Jones industrial average roared more than 1,000 points in late afternoon as stocks snapped a four-day losing streak that had placed the 10-year bull market on the edge of death on Monday.

“Today the market’s message is that we have nothing to fear but fear itself,” said Ed Yardeni, president of Yardeni Research. “The recent selloff reflected fears of an impending recession which were blown away today by Amazon and other retailers reporting a record holiday selling season. Santa is back.”

“Yes, of course, 100 percent,” said Hassett, the chairman of the president’s Council of Economic Advisers, when asked by reporters at the White House if Powell’s job is safe. “Absolutely.”

All three major indexes were on pace to snap a four-day losing streak. The S&P 500 and technology-heavy Nasdaq Composite also bounced. The Nasdaq was up 4 percent and on track to wipe out Monday’s losses. The S&P posted a 2.9 percent pop in afternoon trading.

Crude oil prices surged, posting their biggest increase in two years after a 30-percent plus drop since October.

There was a slight worry that Trump could fire Powell, though the legal waters were murky on that front—and it was more of a rumor mill story. At the same time, it’s not a real shocker that the president is not too happy that the Fed decided to jack up interest rates again. The stock market’s super day comes after retailers posted the best holiday shopping season in six years. A whopping $850 billion was spent over the Christmas season (via WSJ):

“Wall Street is running around like a chicken with its head cut off, while Mr. and Mrs. Main Street are happy with their jobs, enjoying their best wage increases in a decade,” said Craig Johnson, president of Customer Growth Partners, a retail research and consulting firm. A recent drop in gas prices has helped last-minute spending, he said.

Sales have been generally strong throughout the holiday season, led by increases in online shopping. Retailers entered the holidays with momentum as online sales jumped 26.4% from a year earlier between the Wednesday before Thanksgiving through Black Friday, one sign of an early buying surge, according to Adobe Analytics.

Buying slowed in early December in part because an unusually early Thanksgiving made it harder for retailers to sustain sales through the entire holiday shopping period, analysts and consultants said. But shoppers picked up the pace ahead of Christmas.

Sorry, Democrats, looks like a catastrophic economic crash that puts us all in shantytowns isn’t going to happen. As Saint Mick Jagger once said, “you can’t always get what you want.”