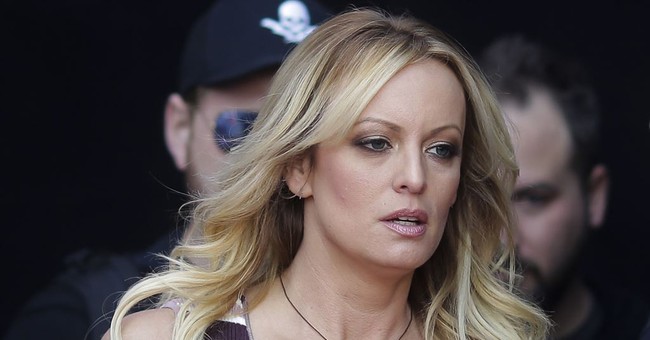 It’s a win for Trump. The defamation lawsuit filed against Donald Trump by Michael Avenatti on behalf of Stormy Daniels has been tossed—and a judge is ordering her to pay nearly the president’s $294,000 legal tab. Daniels recently toldthe Daily Beast that the defamation suit filed by Avenatti was done against her wishes. The suit claimed that Trump has defamed the adult entertainment actress on his Twitter account. Well, regardless of the circumstances, it’s time to pay up, Stormy (via CNBC):

A federal judge just ordered Stormy Daniels to pay a whopping $293K to Trump for “attorneys’ fees, costs, and sanctions” after her defamation case was tossed out the window. pic.twitter.com/ep6YNV6KpD

Trump's lawyer Charles Harder said that the fees that Daniels was ordered to pay amount to 75 percent of Trump's legal feels in the case. And he said the sanctions are for Daniels having filed a "meritless" defamation action against Trump.

But Harder had asked U.S. District Judge S. James Otero earlier this month for almost $800,000 in attorneys' fees and penalties in the case.

Daniels's lawyer Michael Avenatti told CNBC in a text message that, "Harder and Trump deserve each other because they are both dishonest."

"They received less than one half what they asked for because the request was gross and excessive," Avenatti said. "Stormy will never have to pay a dime because they owe her over $1 million in attorney's fees and costs from the main NDA case, especially in light of Cohen's guilty plea to a felony.

Avenatti's text referenced Daniels's still-pending lawsuit against Trump that seeks damages in connection with a non-disclosure agreement, or NDA, that she has with the president.