Liberal Gun Reporter: The Media Is Not Covering Solutions That Could Prevent Mass Shootings...And They Don't Involve Gun Bans 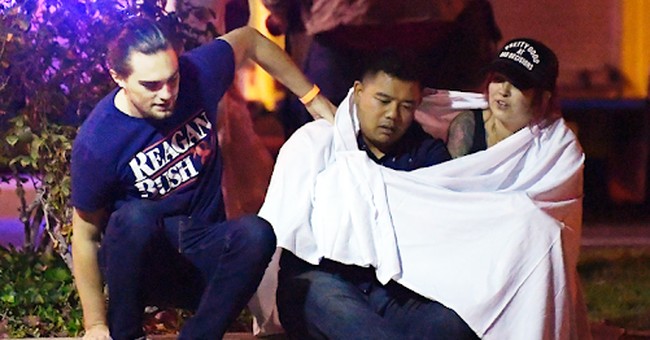 Often times, the media is just dreadful when it comes to reporting on firearms and Second Amendment issues. They continue to misname, misreport, and get parts of guns laws just wrong. Is it deliberate? It’s hard to suggest otherwise. This isn’t the first rodeo and the fact that laws that have been on the books for decades, like 18-year-olds being able to buy long guns, are treated like some shocking discovery a la Watergate continues to be an embarrassing moment for the elite media. It’s all about the narrative.

Yet, there are some reporters writing for left-leaning publications, like The Guardian, who are actually very good on this issue. Yeah, believe it or not, the Left has a couple, not many of course; dedicated reporters who follow the gun beat. The Washington Free Beacon’s Stephen Gutowski is one of the best for conservative media. Lois Beckett is one on the Left who you should follow. You may not always agree, but she’s fair. She wrote in The New York Times about the myth that the 1994 assault weapons ban was effective, while also dispelling the liberal lie that banning AR-15 rifles would reduce crime. Handguns commit the most gun violence, but there is zero political support for that initiative.

In 2017, she wrote about five things we could do right now that could help reduce the mount of mass shooting…and it wasn’t a Moms Demand Action grocery list [emphasis mine]:

Demand that your city use data-driven strategies to reduce violence

More than 25% of America’s gun homicides happen in neighborhoods that contain just 1.5% of the country’s total population. The Live Free campaign and the Community Justice Reform Coalition are working to organize the communities most intensely impacted by violence. These activists believe that that making neighborhoods safer requires addressing gun violence, police shootings and criminal justice reform at the same time – not as competing issues.

Strengthen your state’s approach to guns and domestic violence

Tougher state-level gun laws for keeping firearms out of the hands of domestic violence abusers were associated with two fewer domestic gun homicides per state per year, according to a 2006 study. Experts say making sure police departments are enforcing these laws appropriately is also essential.

Advocates have launched a joint effort this year across 20 states to pass extreme risk protection order laws, which would give family members and law enforcement officials a way to petition a court to temporarily bar at-risk people from possessing firearms. California passed a version of this law in 2014, after a campus shooting in Isla Vista, California.

Learn how to identify when someone’s at risk

Sandy Hook Promise, an advocacy group founded by family members of victims killed at the 2012 Sandy Hook Elementary School shooting, has trained more than two million students and adults in their Know the Signs programs, which helps people identity at-risk behaviors, especially on social media, and learn how to respond effectively.

Have gun owners lead the way in preventing gun suicides

The majority of America’s gun deaths are suicides, and the problem is especially serious in rural states with a strong tradition of gun ownership. Gun dealers and gun rights advocates in some states have been stepping up to help educate people within the firearms community about suicide risk and how to destigmatize seeking mental heath treatment.

These aren’t controversial. Some of these I actually support—and the extreme risk protection order, while there will have to be thorough and explicit language to prevent abuse is something that I think both sides can agree on. Gun policy is back in the news after the horrific shooting at Borderline bar in Thousands Oaks, California. A former Marine, Ian Long, shot and killed twelve people at College Country Night (via WSJ):

Reports show that Long appeared to be suffering from post-traumatic stress disorder, or at least exhibited symptoms of it, but experts warned against blaming his senseless act of violence solely on PTSD.

Yet, Beckett is more concerned about the media’s lack of coverage in the solutions to these types of horrible events. Gutowski has also commented about the media’s poor grasp of gun policy is probably because there is no dedicated staff tasked with reporting and researching at major newspapers and news organizations. Beckett added that Long could have been subjected to a gun violence restraining order law, which was passed in California, but no one knows it exists, not even law enforcement.

“PTSD gunman 'fired a bullet through the wall of his mother's home in April and spent hours holed up inside before police coaxed him out' but he was cleared by mental health specialists” https://t.co/Aq6MAgahEo

I am sick of media outlets making a case for hopelessness and stalemate after the latest mass shooting.

There are ways to prevent some of these these shootings. But people don't know about them because WE DON'T COVER THEM.

From what we know so far, the Thousand Oaks shooting is a *textbook case* where a gun violence restraining order law could have been used to disarm the shooter. California has had this law since 2016, but many family members/law enforcement still don't know the law exists.

Florida used its new gun violence restraining law more often in the first *five months* after the law was signed than California did in the first *two years,* @misstessowen reported yesterday.

Public education and awareness are crucial here. And that's *our job.*

In the face of an increasing number of mass shootings, media outlets give intense coverage to the terror and the trauma of these events, but almost no coverage of solutions, including solutions ordinary people can use. Look at this post-Las Vegas contrast: https://t.co/HSVsMvjC1V pic.twitter.com/4OwG40mlwI

It's not just TV that's the problem. Headlines like this one are just not helpful. And in the case of Thousand Oaks, not accurate.

What's depressing is not the lack of solutions, but the fact that options to help exist and people DON'T KNOW ABOUT THEM. https://t.co/5t89aIXXAr

In years of talking to gun violence prevention advocates and researchers, what I've heard over and over is that the biggest enemy of this work isn't the NRA.

It's the cynicism and hopelessness of the general public--their belief that nothing can be done, why even bother.

None of this is easy. None of the fixes are simple. None work all the time.

But as media outlets, we could choose to focus on the solutions. We could include, in every segment or every story, resources for people who are worried and want to know what options they might have.

People just don't snap. There are almost always red flags--small dots that were not connected. There are often quotes like this one, from the Thousand Oaks shooter's former roommate: https://t.co/6XTD1iTe8G pic.twitter.com/T5wPBwI5w0

There must be so many Americans who watch the coverage of the latest mass shooting with a funny feeling in the pit of their stomachs, worrying about someone they know, but not certain, nothing's clear, and anyway, what could they actually do? Who might actually help?

Our media coverage after mass shootings and other acts of violence could focus on those readers and listeners -- offering them what we know about the options they have, however limited and imperfect, and who's working to improve those options.

We could do this.

To Gabriella's point here, there are research-driven solutions to offer that are supported by gun rights advocates. One of the largest focuses on training gun owners on suicide prevention. We could offer a menu of solutions https://t.co/4rodlRrCZI

There is so much happening right now that feels completely out of our control.

But media outlets *do* have control over how we cover these escalating catastrophes.

We could choose to focus more on solutions. To interview more people who are taking action.

Long appears to have debated his sanity, according to the Associated Press. And then, there’s this story [emphasis mine]:

Earlier this year, police were summoned to the home. Long was holed up inside; furniture was thrown around, neighbors said, and a bullet had been fired through the wall.

The street was blocked off, and police spent hours trying to get Long to peacefully come outside.

“They couldn’t get him out for a long time, like half the day,” said neighbor Richard Berge.

The Ventura County sheriff said in a briefing Thursday that deputies responded to a disturbance at the Longs’ home in April and mental-health specialists were dispatched. They determined that Long wasn’t a threat and didn’t qualify for an involuntary psychiatric hold.

Law enforcement also was involved in an incident in 2015 in which Long was the victim of a battery at a bar, the sheriff said.

This is another issue entirely. When someone holds themself up for half the day and fires bullets into the wall, wouldn’t you take extra steps to ensure that everything is truly okay? And this isn’t a case of oversensitivity or overzealousness on behalf of law enforcement. I think anyone would consider someone doing this to have issues and possibly have such a protection order filed against them.

Beckett added that these horrible incidents never happen out of the blue. No one ever snaps; there is a trail of red flags. She also said that there are research-driven solutions that gun rights advocates do support, which coupled with some of the ones on the Left, that don’t veer into ‘take all the guns’ territory, there has to be solutions both sides can agree on to at least provide some framework to prevent more tragedies like Sandy Hook, Borderline, and Marjory Stoneman Douglas. For now, the aftermath is the same: mourn the dead for two seconds, blame the NRA, blame Trump, recycle straight trash reporting on gun laws that have been on the books since Kennedy was in office, and repeat. I don’t mind having conservations with pro-gun control, folks, but when they say I’m evil for supporting the Second Amendment, the conversation ends…quickly.