'He Understands Why We're Angry': What Women See At Trump Rallies 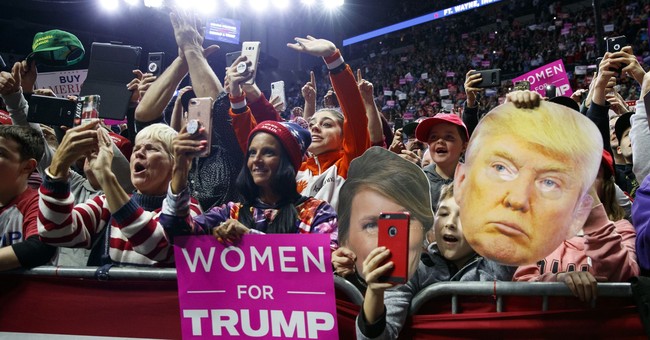 What about the women? It’s the year of the woman (again). Women aren’t drifting to the GOP. They could spell trouble for President Trump. We’ve all heard these points blasted on the liberal news networks. Liberals will note the 41 overall percent of female voter support as not very good, but Trump won 52 percent of white women, especially white working-class women. Trump trounced Clinton in this demographic, 62/34. If it had been 50-50, Clinton would’ve won. So, is Trump in serious trouble with women? In July, polling suggested his numbers with white women could be his salvation. As we approach Election Day, scores of women at Trump rallies see a man who understands their issues, their anxieties, and is someone willing to defend a way of life. Also, it’s not just white women who feel that way (via NYT):

Ms. Philpott was one of thousands of women who braved a drizzle for hours to have the chance to cheer Mr. Trump at a rally here on Thursday. While political strategists and public opinion experts agree that Mr. Trump’s greatest electoral weakness is among female voters, here in Columbia and places like it, the president enjoys a herolike status among women who say he is fighting to preserve a way of life threatened by an increasingly liberal Democratic Party.

“He understands why we’re angry,” Ms. Philpott said, “and he wants to fix it.”

Anna Greenberg, a managing partner of the Democratic polling firm Greenberg Quinlan Rosner, said that Mr. Trump’s dark view of immigration, articulated in a racist video posted to his Twitter account and several fiery speeches, was likely to repel suburban and educated women.

“I don’t see any reason to believe we aren’t going to have an enormous gender gap, particularly driven by suburban women,” Ms. Greenberg said in an interview.

Yet days before the midterm elections, women are streaming into the president’s campaign events wearing bedazzled hats and T-shirts proclaiming Mr. Trump’s greatness. In between the selections from the musical “Cats,” the Celine Dion ballads and the Elton John classics that fill out the president’s campaign soundtrack, they hoist hot-pink “Women for Trump” signs as they balance babies on their hips. And they scoff at the suggestion that Mr. Trump — who has been accused of sexual assault and boasted graphically that he could do “anything” with women — has a problem with them.

“I get a kick out of it,” said Misty Spencer-Sauer, 40, a stay-at-home mother from Blackwater, Mo., who drove more than an hour to attend the Columbia rally with her father and fiancé. “I just sit and yell at my TV, because they twist around what he says and it’s, like, everybody’s so sensitive all the time. He may be blunt, but I can take it.”

Like Ms. Philpott, many of the women expressed a vague anxiety about an economic downturn if Republicans lose.

That is certainly the case for Kristin Sellers, 48, of Pace, Fla., who said she was “anxious as hell” about the migrants, and trusted Mr. Trump to keep them out.

“It doesn’t mean I agree with everything that comes out of his mouth, because like his wife, I’d like to take his phone from him, but I just felt that we needed someone with a business sense to get our country back on track, and that’s what Trump has done,” Ms. Sellers said as she waited for Mr. Trump in an airplane hangar in Pensacola, Fla., on Saturday.

Meifang Wang, 54, a cardiovascular researcher at the University of Missouri, also sparred with her children about her support for Mr. Trump, an argument that they won in 2016, when they persuaded her on Election Day to stay home rather than vote for him.

Ms. Wang, who immigrated from China in 1990 and voted for President Barack Obama twice, said Mr. Trump’s harsh tone and policies toward immigrants did not bother her.

“You guys think it’s not very humanitarian, but he’s doing the right thing,” she said. “We work hard and pay our taxes, and they’re living life as freeloaders — I call them freeloaders.”

Shocker—women voters aren’t monolithic. They have differing interests, concerns, and views just like everyone else. Some women interviewed were worried about the illegal alien horde approaching our southern border, anyone should—and yes, this is partially why we voted for Trump to severely curb and deter illegal aliens from pouring into our country. If Trump’s white working class support holds, and I’m not even including women in this social class, he’ll win re-election. If support for him ticks up five more percentage points, Trump will win the Electoral College and the popular vote in 2020.

Yet, back to one election at a time: the midterms are here. No one really knows anything concerning the polling. The generic ballot advantage is worthless since the races that will decide the House are all within the margin or error. It’s all about turnout. Both sides are jacked up to vote. We’ll see what happens, but it seems clear that with the millions of women voters that have drifted to Trump, they’re not ready to abandon him yet.