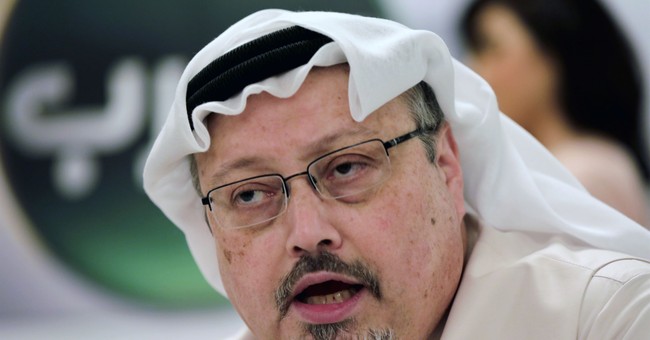 Saudi Arabian journalist Jamal Khashoggi is still missing, though it’s looking very likely that he was killed. He entered the Saudi Arabian embassy in Istanbul on October 2 in order to receive proper documents to remarry. Khashoggi needed to prove that he was divorced from his first wife to legally marry again in Turkey. He went in and never came out. According to Turkish sources, a 15-man team sent by Saudi Arabia killed him. They proceeded to dismember him. He was reportedly alive when he was cut to pieces, and his body parts disposed of in acid. There’s reportedly an audio recording of the grisly murder. Khashoggi was known to be a tough critic of the Saudi royal family, especially the crown prince. Intercepts indicate that the Saudi government discusses ways to lure Khashoggi back into the country. Well, before his disappearance, he was able to write one last column, which The Washington Post, with whom he had written previously, published last night. It was a call to the Arab world to embrace freedom of expression. Here’s part of the column:

I was recently online looking at the 2018 “Freedom in the World” report published by Freedom House and came to a grave realization. There is only one country in the Arab world that has been classified as “free.” That nation is Tunisia. Jordan, Morocco and Kuwait come second, with a classification of “partly free.” The rest of the countries in the Arab world are classified as “not free.”

As a result, Arabs living in these countries are either uninformed or misinformed. They are unable to adequately address, much less publicly discuss, matters that affect the region and their day-to-day lives. A state-run narrative dominates the public psyche, and while many do not believe it, a large majority of the population falls victim to this false narrative. Sadly, this situation is unlikely to change.

The Arab world was ripe with hope during the spring of 2011. Journalists, academics and the general population were brimming with expectations of a bright and free Arab society within their respective countries. They expected to be emancipated from the hegemony of their governments and the consistent interventions and censorship of information. These expectations were quickly shattered; these societies either fell back to the old status quo or faced even harsher conditions than before.

The Arab world is facing its own version of an Iron Curtain, imposed not by external actors but through domestic forces vying for power. During the Cold War, Radio Free Europe, which grew over the years into a critical institution, played an important role in fostering and sustaining the hope of freedom. Arabs need something similar. In 1967, the New York Times and The Post took joint ownership of the International Herald Tribune newspaper, which went on to become a platform for voices from around the world.

My publication, The Post, has taken the initiative to translate many of my pieces and publish them in Arabic. For that, I am grateful. Arabs need to read in their own language so they can understand and discuss the various aspects and complications of democracy in the United States and the West. If an Egyptian reads an article exposing the actual cost of a construction project in Washington, then he or she would be able to better understand the implications of similar projects in his or her community.

The Arab world needs a modern version of the old transnational media so citizens can be informed about global events. More important, we need to provide a platform for Arab voices.

Khashoggi’s disappearance and apparent murder by Saudi operatives sparked widespread condemnation. It’s a major bump in the road for U.S.-Saudi relations. Secretary of State Mike Pompeo went over there to get a better hold on the situation, and to catch up on what the hell is going on. They’ve pledged to pay the U.S. $100 million for “stabilization efforts” in Syria.