'Assault On The White House': Behold The Media Meltdown Over Kanye West's Visit To The Oval Office 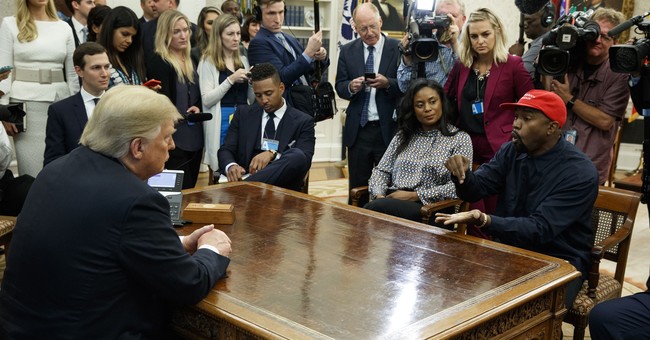 Kanye West stopped by the Trump White House today to discuss prison reform, among other things. He mentioned the right to bear arms, the problem of illegal firearms, and a whole host of issues that certainly triggered the elite news media. The clip will be featured down below. Kanye then walked over and hugged President Trump. You knew once that happened, West was going to be torched by liberals who cannot stand him saying nice things about Trump and his message.

The Daily Caller’s Amber Athey was there to list the grocery list of meltdowns that occurred, the worst being from MSNBC, who claimed this visit was an “assault on our White House” (via Daily Caller):

“I love Hillary. I love everyone, but the campaign ‘I’m with her’ just didn’t make me feel — as a guy … it was something about this hat that made me feel like Superman,” famed musician Kanye West said of his MAGA hat while discussing masculinity, the economy and his brand pic.twitter.com/T06Z5tOSIU

Anchors and guests on CNN and MSNBC have argued that Kanye’s mental health issues are a reason not to take him seriously and have suggested that his support for Trump is a side effect of his diagnoses.

“All jokes aside, I thought that was really sad,” Cupp said. “I think you had there a man who’s clearly not okay, and a president who’s willing to exploit that.”

Democratic Rep. Jackie Speier added her own voice to the pile of critics, saying on CNN that she felt like she was sitting in on a “psychiatric visit.”

“I would suggest that the president should maybe curtail these types of engagements,” the California Democrat asserted.

#Kanye couldn’t have said it better: Illegal guns are the problem, and we have the right to bear arms. The #NRA’s nearly six million members are glad to see a celebrity who gets it, and who is willing to stand with the #2A. @realDonaldTrump pic.twitter.com/RJffxucAM5

Old enough to remember when a YouTube star who drinks cereal from a bathtub interviewed President Obama in the White House.

So please gtfo with this pearl-clutching "That was an assault on our White House!" selective outrage nonsense. pic.twitter.com/c3p4RaB5VU