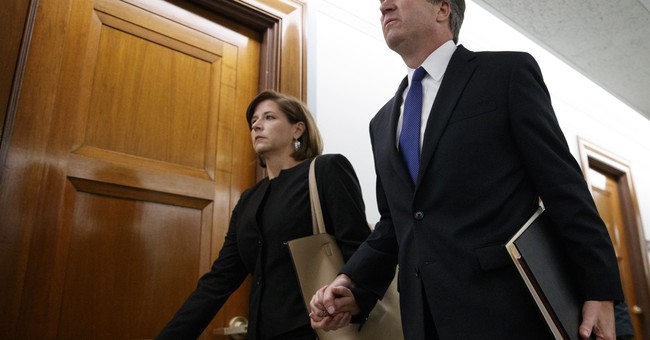 UPDATE: The FBI has spoken to second Kavanaugh accuser Deborah Ramirez. It lasted a couple hours:

FBI agents on Sunday interviewed Brett Kavanaugh accuser Deborah Ramirez as part of the agency’s week-long probe into blistering sex-assault allegations leveled against the US Supreme Court nominee, according to a report.

Ramirez has claimed that Kavanaugh exposed himselfto her during a Yale college party when he was a freshman. He has vehemently denied the incident.

Ramirez spoke with agents Sunday and provided a list of witnesses to the alleged incident, sources told CNN.

The interview lasted a “couple of hours,” an ABC News producer tweeted.

So, NBC News reported that the Trump White House would be placing limits on the FBI investigation into the allegations of sexual misconduct that have been lobbed at Judge Brett Kavanaugh, President Trump’s Supreme Court nominee. Specifically, the original report was that no interviews were to be take from the third accuser, Julie Swetnick, who alleges that Kavanaugh was part of a gang rape ring in high school.

It’s been a sad and disgraceful week. Ever since these allegations were dredged up from the Democratic cesspool, this whole nomination has been engulfed in chaos. To recap, Sen. Dianne Feinstein’s (D-CA) office had a letter written to her by Christine Blasey Ford, the first accuser who alleges Kavanaugh tried to rape her at a high school party, which she sat on for weeks. She only dropped it after it became clear that Kavanaugh was on the fast track to confirmation. Since then two more women have come forward. All three allegations are without evidence or corroborating witnesses, but when it comes to allegations of sexual assault, the Left abhors due process because of some cuckoo idea that women are incapable of lying. So, for them, their goal has been to delay, destroy Kavanaugh’s character, and use this to stir up the base in the hopes of winning the midterms. In doing so, they’re creating a kangaroo court-style precedent, where any allegation without evidence can we weaponzied to take out political opponents.

Safe to say that @NBCNews needs to issue a retraction and an apology. https://t.co/KSNQUg9iUS

NEW: FBI interview of Mark Judge will include questions about BOTH Swetnick and Blasey allegations. https://t.co/KKfui2ej2z

Yet, The New York Times is now reporting that there won’t be any limits set in the investigation. Give the Timescredit, they can’t stand Donald Trump, but they didn’t run full stories on the Deborah Ramirez and Swetnick, the two other accusers, because they could confirm anything about their accounts (via NYT):

The inquiry, which will last no more than a week, is a limited background check of Judge Kavanaugh, not a full-fledged criminal investigation. He has vigorously denied any sexual impropriety or wrongdoing.

Democrats, left out of the discussions that led to Mr. Trump’s order, tried on Saturday to clarify the scope of the F.B.I. investigation with Senate Republicans and the White House. Senate Republicans drafted the witness list for the background check, according to the people familiar with it, and the Senate majority leader, Mitch McConnell, shared it with the White House.

The background check is the latest twist in a drama that has gripped the Capitol for the past two weeks, since a Northern California research psychologist named Christine Blasey Ford alleged that a young Mr. Kavanaugh attempted to rape her at a house party when they were teenagers. Mr. McConnell has said senators will vote on whether to confirm Judge Kavanaugh after the F.B.I. concludes its work.

The bureau will investigate aspects of the allegations made by Dr. Blasey, Ms. Swetnick and a third woman, Deborah Ramirez. She has said Judge Kavanaugh exposed himself to her during their freshman year at Yale. Ms. Ramirez’s lawyer, John Clune, said on Saturday that the F.B.I. had “reached out to interview Ms. Ramirez, and she has agreed to cooperate with their investigation.”

The four witnesses were Mr. Judge; Leland Keyser, a high school friend of Dr. Blasey’s whom she said attended the party but was not told of the assault; P.J. Smyth, another party guest; and Ms. Ramirez, the Yale accuser.

Led by Donald F. McGahn II, the White House counsel, Mr. Trump’s advisers are helping direct the scope of the background check, according to the senior administration official. Mr. McGahn shared the witness list with the F.B.I. but is working in concert with Senate Republicans, and senators considered key swing votes have had extensive input, the people said. Senators Susan Collins of Maine and Jeff Flake of Arizona have both said they want Mr. Judge questioned by the F.B.I.

Of course, Democrats have issues. When are they not complaining? Here’s stolen valor disgrace Sen. Richard Blumenthal (D-CT):

Recommended
Echoes of a Boom in Iran
Jonathan Feldstein

Democrats raised concerns about the scope of the background check on Saturday.

“We have been concerned from the outset about the so-called limits on scope, not to mention time for this investigation,” said Senator Richard Blumenthal, Democrat of Connecticut and a member of the Judiciary Committee. “It has to be full fair, real, not check-the-box. So any limits should be viewed with serious question.”

Senator Kamala Harris, Democrat of California, called reports of the White House’s role in the inquiry “outrageous” and said on Twitter, “The White House should not limit or interfere with the FBI investigation in any way.”

On a side note, it's very rich seeing a man who lied abut his Vietnam War service, Blumenthal, and someone who admitted to groping a high school friend without consent, "roaming' hands" Cory Booker, talking about upholding integrity and getting to the bottom of what are still baseless accusations.

.@SenBlumenthal lied for years about serving in Vietnam, which is all you need to know about his courage & honesty. Maybe he should reconsider before questioning Judge Kavanaugh’s credibility.

This is a preview of what’s to come, folks. The FBI will do this review, and then they’re going to say it wasn’t good enough. They’re going to say it was thorough enough. And they’re going to ask for more time, and they know all they have to do is lure weak sauce Jeff Flake, who caused all of this nonsense, in their backroom to beat into submission for another round of this nonsense. It will be another weak of character assassination—and we have Jeff Flake, GOP Benedict Arnold, to thank for prolonging this disgraceful process.