Oh, So, Deputy AG Rosenstein Was Joking About Wearing A Wire To Ensnare Trump? 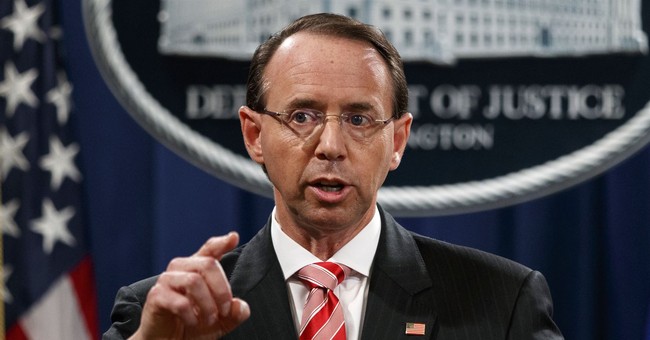 Piggybacking off of Cortney’s story, this was all a joke? The New York Timeshad a lengthy piece, citing anonymous sources, about Deputy Attorney General Rod Rosenstein wanted to wear a wire to build a case of invoking the 25thAmendment to remove President Trump:

The deputy attorney general, Rod J. Rosenstein, suggested last year that he secretly record President Trump in the White House to expose the chaos consuming the administration, and he discussed recruiting cabinet members to invoke the 25th Amendment to remove Mr. Trump from office for being unfit.

Mr. Rosenstein made these suggestions in the spring of 2017 when Mr. Trump’s firing of James B. Comey as F.B.I. director plunged the White House into turmoil. Over the ensuing days, the president divulged classified intelligence to Russians in the Oval Office, and revelations emerged that Mr. Trump had asked Mr. Comey to pledge loyalty and end an investigation into a senior aide.

Mr. Rosenstein was just two weeks into his job. He had begun overseeing the Russia investigation and played a key role in the president’s dismissal of Mr. Comey by writing a memo critical of his handling of the Hillary Clinton email investigation. But Mr. Rosenstein was caught off guard when Mr. Trump cited the memo in the firing, and he began telling people that he feared he had been used.

Mr. Rosenstein made the remarks about secretly recording Mr. Trump and about the 25th Amendment in meetings and conversations with other Justice Department and F.B.I. officials. Several people described the episodes, insisting on anonymity to discuss internal deliberations. The people were briefed either on the events themselves or on memos written by F.B.I. officials, including Andrew G. McCabe, then the acting bureau director, that documented Mr. Rosenstein’s actions and comments.

None of Mr. Rosenstein’s proposals apparently came to fruition. It is not clear how determined he was about seeing them through, though he did tell Mr. McCabe that he might be able to persuade Attorney General Jeff Sessions and John F. Kelly, then the secretary of homeland security and now the White House chief of staff, to mount an effort to invoke the 25th Amendment.

Okay—so is anyone skeptical about this, especially the dragooning of Attorney General Jeff Sessions and John Kelly to join this clown show? Now, NBC News is reporting that Rosenstein was joking about wearing a wire:

Deputy Attorney General Rod Rosenstein was joking when he discussed wearing a wire to secretly record President Donald Trump and does not believe Trump should be removed from office through the use of procedures outlined in the Constitution's 25th Amendment, according to sources familiar with his conversations.

The sources were responding to a New York Times report that Rosenstein, in the tumultuous spring of 2017, had discussed with other Justice and FBI officials the possibility of recruiting members of Trump's Cabinet to declare him unfit for the job and that he offered to wear a recording device during conversations with the president.

In a May, 16, 2017 meeting at a secure facility at the Justice Department — one week after Trump fired FBI Director James Comey — Rosenstein was arguing with Andrew McCabe, then the acting director of the FBI, about the president, according to a senior Justice Department official.

Well, what do you want me to do, Andy, wear a wire?" Rosenstein asked at the meeting, which also included FBI lawyer Lisa Page and four career DOJ officials, according to the senior official. One of the career civil servants was Scott Schools, who would later go on to sign off on the firing of McCabe, the official said.

This official and a source who was in the room characterized Rosenstein's remark as sarcastic.

It’s anonymous sources tag. It’s absurd. The whole story is just too good to be true. As Cortney noted, Mr. Rosenstein has already said the Times story was inaccurate. There are moments, where anonymous sources have led to great journalism and blown open huge stories, like Nixon and Watergate. In general, I’m not against this avenue when it comes to obtaining information for stories, butthe use of anonymous sources has ended disastrously—and it’s not just for Trump White House pieces. When the San Bernardino terror attack happened three years ago, The Timesstepped on a rake when it reported that the government had missed social media posts from one of the attackers, Tashfeen Malik. The other dealt with the Clinton and her email fiasco. The paper’s public editor, who is no longer there, highlighted both trip ups. In fact, the Times reportedly had sought to tighten the screws on such sources after these errors. It’s a wait-and-see game with this drama, which will likely turn out to be nothing. With the media’s serial failure to report on this administration accurately, and the list is extensive, get back to your normal day folks. The seriousness of this story was dropped several levels in the span of a couple hours.