Bob Woodward: I Looked For Two Years...There's No Evidence Of Trump-Russia Collusion 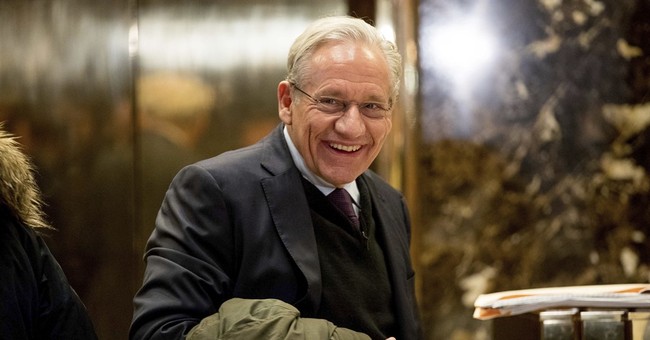 The Washington Post’sBob Woodward is out with Fear, a comprehensive insight into the inner workings and machinations of the Trump White House. CNN and MSNBC loved it, especially all the gossip about the infighting, calling the president names, the lack of respect, and the supposed chaos that reigns within the halls of the Trump White House. Scores of officials in the book have issued statements saying many of the allegations in the work are not true; former New Jersey Gov. Chris Christie was one of those people who very publicly called Woodward out for making stuff up. It was a two year project that some said flopped. Yes, it’s a top-selling book—this is Bob Woodward we’re talking about here. But there was no shock value, no ‘holy cow’ moment, according to Jeff Greenfield. Voters knew, as they do now, the quirks of Donald J. Trump. As he put it, there will be no work that shows pool orgies, sexual misconduct, and episodes of paranoia that were later revealed by the Kennedy, Clinton, and Johnson White Houses respectively. We know who Trump is—and we don’t care. Keep America Great 2020. Yet, while Hugh Hewitt was interviewing Woodward last Friday, they do discuss the Mueller probe (aka the DOJ’s Russia probe), former Trump legal adviser John Dowd warning the president not to cooperate, and Russian collusion. Yes, while the liberal media is blathering about this book, they would definitely miss, or ignore, this tidbit: he found zero evidence of Russian collusion. Here’s the transcript courtesy of Real Clear Politics

Hugh Hewitt: So let’s set aside the Comey firing, which as a Constitutional law professor, no one will ever persuade me can be obstruction. And Rod Rosenstein has laid out reasons why even if those weren’t the president’s reasons. Set aside the Comey firing. Did you, Bob Woodward, hear anything in your research in your interviews that sounded like espionage or collusion?

Bob Woodward: I did not, and of course, I looked for it, looked for it hard. And so you know, there we are. We’re going to see what Mueller has, and Dowd may be right. He has something that Dowd and the president don’t know about, a secret witness or somebody who has changed their testimony. As you know, that often happens, and that can break open or turn a case.

HH: But you’ve seen no collusion?

Okay—the man who took down Nixon, who tracked a campaign donation to a slush fund within the Committee to Re-Elect The President, said there’s no evidence of collusion, which has been a pervasive theme in this clown show investigation. Wood ward found zilch—and he probably would have found it by now. Any investigative body would have found something to link the Trump team to the Kremlin if this shoddy allegation and liberal coping exercise were true; it’s not. There’s zero evidence of collusion. It’s time for Special Counsel Robert Mueller to wrap it up. Also, Democrats—brace yourselves—your antics over this whole episode will help Trump clinch a second term. Bravo!