You're Being Torn Apart: Trump Torches CNN For Its Garbage Russian Collision Story; UPDATE: Network Stands By Its Trash Reporting 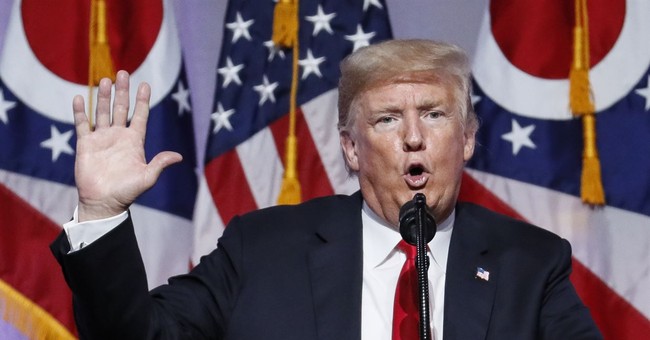 President Trump went on a tear against CNN yesterday, tweeting “CNN is being torn apart from within based on their being caught in a major lie and refusing to admit the mistake. Sloppy Carl Bernstein, a man who lives in the past and thinks like a degenerate fool, making up story after story, is being laughed at all over the country! Fake News.”

This refers to CNN’s much prized Russia collusion “scoop” from July, where some people said, citing Michael Cohen, that President Trump knew about the much overblown Trump Tower Meeting some Russians had with Donald Jr., which amounted to nothing and was a colossal waste of time. The first red flag was this part: “To be clear, these sources said Cohen does not have evidence, such as audio recordings, to corroborate his claim, but he is willing to attest to his account.” The second part, and this is where it gets funny, the anonymous source CNN used is none other than Lanny Davis, former Clinton attorney and the man representing Cohen, who plead guilty to bank and tax fraud charges.

CNN is being torn apart from within based on their being caught in a major lie and refusing to admit the mistake. Sloppy @carlbernstein, a man who lives in the past and thinks like a degenerate fool, making up story after story, is being laughed at all over the country! Fake News

Make no mistake, Mr. President, CNN does not lie. We report the news. And we report when people in power tell lies. CNN stands by our reporting and our reporters. There may be many fools in this story but @carlbernstein is not one of them.

You reported in a story sourced to Lanny Davis that Lanny Davis refused to comment on the story. That was a lie. And not only did you deliberately lie to push an agenda, you have thus far refused to even acknowledge the lie, let alone apologize for it. https://t.co/LR21bPgeu6

“Contacted by CNN, one of Cohen's attorneys, Lanny Davis, declined to comment,” they reported at the time. Guys—this story is a bust. It’s total garbage. And you’re standing by it because…you’re afraid. Is that it? You’re getting towel slapped right now—and you deserve it. You would get another richly deserved belt to the face for retracting or correcting the story, but it’s the right thing to do. CNN seems to rather hide under the bed. I guess I would as well if I were caught being dishonest regarding "contacting" our own anonymous source for comment and saying that he, or she, declined to comment.

With due respect to Carl Bernstein, it still needs to be explained by one of the three Cohen/Trump Tower story authors how Lanny Davis was presented as someone declining comment while serving as a primary anonymous source in the same story. We can all agree that misled readers. https://t.co/CGIyVx7gEp

The communications arm of the news network replied to Trump’s tweet last night:

Make no mistake, Mr. President, CNN does not lie. We report the news. And we report when people in power tell lies. CNN stands by our reporting and our reporters. There may be many fools in this story but Carl Bernstein is not one of them

Yeah, this is why no one trusts the elite media. This is what Lanny Davis said after being exposed as the source, in which he backpedals on everything (via Buzzfeed):

We stand by our reporting. So, you’re too good, too arrogant, and too stupid to know a) when you’ve made a major error, possibly one of the worst in this whole non-story of Russian collusion; and b) embarrassed the industry to no end. It’s been over a year and there’s still zero evidence to suggest the Kremlin colluded with the Trump team. None. This we’re too good for corrections attitude is exactly what you’d expect from a liberal anti-Trump network. Maybe if you were good at your jobs, this nonsense wouldn’t happen. I’ve made mistakes. We all have, but on stories like Trump and the Japanese prime minister feeding koi fish that’s almost idiot-proof in terms of botching the reporting of that story. CNN managed to find a way. Does CNN know they will lose a fight with the Trump White House? They’re the 2017 Cleveland Browns in this bout with the president. They will never win, but keep going because Trump making CNN look like straight trash is too good to avoid.