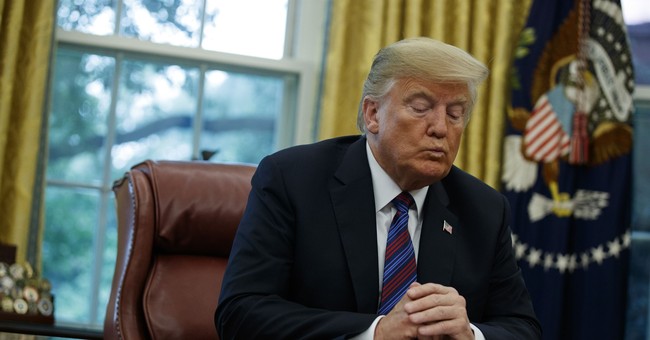 CNN is another favorite punching bag, besides Hillary Clinton. The network is explicitly anti-Trump, self-righteous, and absolutely insufferable. Granted, there are some good people there, but this is cumulative effect here; CNN does indeed suck. It’s a bit odd given that three-fourths of their audience probably only watch CNN because they’re at the airport. Heck, and I know we’ve mentioned this a lot, they couldn’t accurately report on President Trump feeding koi fish with the Japanese Prime Minister Shinzo Abe. It’s a photo op where two men were feeding fish—and they botched that. They botched what they described as another big Russia collusion scoop in December, where apparently reporters at CNN couldn’t read time stamps properly.

Then-candidate Donald Trump, his son, Donald Jr., and key members of his inner circle received a decryption key via email from a donor to the trove of emails that would be unveiled by Wikileaks in September of 2016. Gasp! Collusion! Scandal! Nope—the email was sent on September 14, 2016, one day later after all of the emails were made public. CNN thought it was sent on September 4. Say it with me now: Wrong.

Well, their latest screw up is just as epic. Remember this story about Trump’s former personal lawyer Michael Cohen saying he knew that Trump was aware of the 2016meeting his son took with some Russians at Trump Tower, which turned out to be a big waste of time in which nothing of any importance was divulged. Yeah, CNN was on it last July [emphasis mine]:

Michael Cohen, President Donald Trump's former personal attorney, claims that then-candidate Trump knew in advance about the June 2016 meeting in Trump Tower in which Russians were expected to offer his campaign dirt on Hillary Clinton, sources with knowledge tell CNN. Cohen is willing to make that assertion to special counsel Robert Mueller, the sources said.

Cohen's claim would contradict repeated denials by Trump, Donald Trump Jr., their lawyers and other administration officials who have said that the President knew nothing about the Trump Tower meeting until he was approached about it by The New York Times in July 2017.

Cohen alleges that he was present, along with several others, when Trump was informed of the Russians' offer by Trump Jr. By Cohen's account, Trump approved going ahead with the meeting with the Russians, according to sources.

To be clear, these sources said Cohen does not have evidence, such as audio recordings, to corroborate his claim, but he is willing to attest to his account.

Sources. Well, the source was Lanny Davis, former Clinton lawyer who is now representing Cohen—and he pretty much took back everything he said. Yet, the fact that no evidence existed to corroborate the claim in the first place probably should have raised red flags, but whatever. Its just part of the elite media’s serial failure in reporting on this White House accurately (via Buzzfeed) [emphasis mine]:

Oh, and the network is standing by what is now a hollow, gutted corpse of a story. This is CNN.

UPDATE: Even liberal writers are saying this was a pretty bad trip-up, maybe one of the worst in the whole Russia collusion reporting cycle.

2/ CNN has stood by its story even as Lanny Davis has also revealed he was the source for stories in the Washington Post & New York Post that "confirmed" CNN's. How can they now? (https://t.co/wwOW5kwzY3) (https://t.co/DxmbbWQd1G) pic.twitter.com/LmjW7hDXLf

3/ What is all the more embarrassing for CNN is that they appear to have lied -- or most generously, blatantly misled -- in their July 26th story to cover up for the fact that Davis was a source! In that story, they claim that Davis "declined to comment." https://t.co/rp1Tol0JmR pic.twitter.com/Ej2Rbhcq7e

4/ This is one of the biggest Russiagate media gaffes to date, and there have been too many count. And yet another teachable moment for many other outlets who have ran with every "explosive" story under the sun, no questions asked.