PETA Won Its Battle With Animal Crackers. Now Those Circus Creatures Can Be Free...On The Boxes 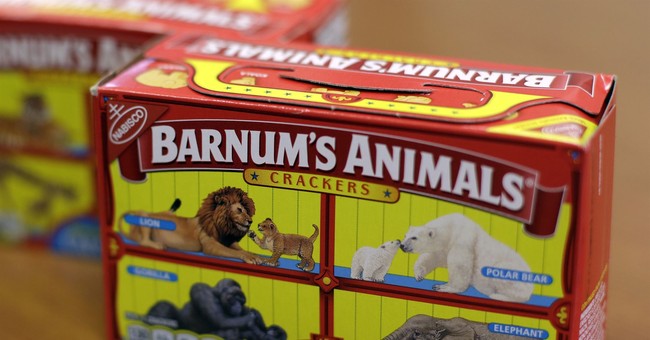 I guess I like animals, though I’m not an animal-lover per se in the sense of those who are members of PETA (People for the Ethical Treatment of Animals). They’re causing a stir with their anti-crab meat billboard, which is straight trash. Last week, I went on vacation along the Oregon coast, went salmon fishing, caught a monster fish, and promptly got it into the boat and killed it. It was delicious. PETA would be triggered, and you know what else appalled them: the animal crackers boxes. Yeah, the pictures of circus animals behind bars on the Barnum’s Animal Cracker box triggered these folks. No, I’m not kidding—and Barnum’s caved to these crazy people (via NYT):

After 116 years of captivity, animal crackers have been freed from their cages.

It was a symbolic victory for animal rights activists, notably People for the Ethical Treatment of Animals, which had argued that the immediately recognizable yellow-and-red boxes by Nabisco portrayed a cruel bygone era when traveling circuses transported exotic wildlife in confinement.

The new boxes are expected to arrive in stores this week. They show a zebra, an elephant, a lion, a giraffe and a gorilla roaming free side-by-side in a natural habitat, a sweeping savanna with trees in the distance.

While the animals enjoy freedom on the box, the small, crisp, sweet crackers themselves are of course still destined for human stomachs or perhaps the crevices of baby strollers.

They were not let out without a little controversy. It started in 2016, when PETA, which opposes the confinement of wild animals for entertainment, asked Mondelez International, the parent company of Nabisco, to remove the cages.

The company maintains the design change is part of a continuum.

“Throughout our history, we have leveraged and evolved our classic design to drive awareness around key animal and environmental issues,” a Mondelez spokeswoman said on Tuesday. “To continue to make the brand relevant for years to come, we felt this was the right time for the next evolution in our design, now showing the animals in a natural habitat.”

Oh my god, is this really a victory for animal rights, or just another case of liberals with too much money and time on their hands just causing trouble? I say the latter. Changing the box won’t do anything. Kids eat the crackers, not ponder whether the elephants are being whipped and abused at a circus. So, now that animal cracker boxes feature free animals, everything will change o this front, right? Nope. Chalk this up as another instance where political correctness clinched another win.