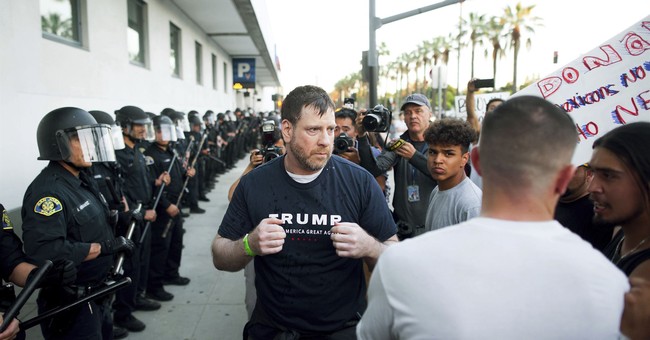 Remember the Trump rally in San Jose, California In June of 2016? It was a complete and total disgrace, not because it was a Trump rally, but because hordes intolerant liberals decided it was totally fine to assault people with whom they disagree politically. Punches were thrown, along with eggs, at Trump supporters because, well, they weren’t supporting Hillary Clinton. This is the Left. This is how they all are: intolerant, insufferable, condescending, unhinged, and violent. Wait—what about the San Jose police? Well, they totally lost control of the situation, leading to scores of anti-Trump protesters chasing down Trump supporters. It was mob rule. It’s behavior liberals desperately want in this country: a tyrannical mob beating up people they hate. It’s why the upcoming 2018 and 2020 elections are so critical, folks. We cannot let these despicable people win.

San Diego police reported that approximately 300 to 400 protesters gathered outside of Trump's event, which led to four arrests for "for incidents including assault with a deadly weapon and unlawful assembly," Officer Albert Morales said in a statement.

"While several physical assaults did occur, the police personnel on scene had the difficult task of weighing the need to immediately apprehend the suspect(s) against the possibility that police action involving the use of physical force under the circumstances would further insight the crowd and produce more violent behavior," Morales said.

A police sergeant was one of the ones who dealt some of the brunt of the violence, suffering minor injuries "after a protester struck him with a metal object."

Trump's foes surrounded the San Jose Convention Center, where scuffles broke out between them and Trump supporters. Some of the altercations were physical, resulting in bloody injuries…

Our video of Trump supporter who says he was beaten up coming out of @realDonaldTrump rally. pic.twitter.com/PQSxjXfonl

BREAKING: The police in San Jose have appeared to lost control. Trump supporters being terrorized and beaten up by mobs of protestors.

Police had been completely overwhelmed by the protesters. Now trying to regain some order. pic.twitter.com/QUXcNZgVbq

Trump supporters who were brutalized by this left wing mob of deplorables filed a lawsuit against the San Jose Police Department. Well, the Ninth Circuit ruled that their lawsuit could go forward (via CBS San Francisco):

A three-judge panel with Ninth Circuit Court of Appeals agreed with Trump supporter Juan Hernandez, the lead plaintiff in a federal lawsuit against the San Jose Police Department.

The lawsuit claims San Jose police funneled Trump supporters leaving a June 2016 rally right into the middle of a crowd of counter-protesters, who quickly surrounded and attacked them.

Fox News is a little more detailed in the allegations:

One plaintiff claims an officer told her police had been instructed not to intervene in the melee.

The lawsuit says police arrested three people for allegedly assaulting officers at the scene, but no one for attacking Trump supporters, the Chronicle reported.

San Jose Police Chief Eddie Garcia praised the officers after the rally for “their effectiveness and their restraint,” while the city’s lawyers said officers did not create the danger and should not be second-guessed for legitimate law enforcement decisions.

However, the court said the officers on duty, according to the allegations, had known about violence at past pro-Trump rallies.

“The attendees allege the officers shepherded them into a violent crowd of protesters and actively prevented them from reaching safety,” Judge Dorothy Nelson said in the 3-0 ruling that upheld a federal judge’s refusal to dismiss the suit. “The officers continued to implement this plan even while witnessing the violence firsthand.”

The court said that if the plaintiffs can prove their allegations, they would show police increased the danger to Trump supporters and knowingly exposed them to risk.

Let’s hope justice will be served.