NBC Poll: Democratic Ballot Advantage Shrinks To Six Points, But GOP Far From Being Out Of The Woods 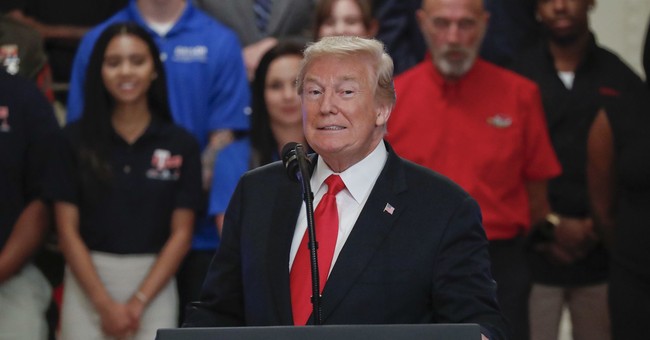 We’re 106 days away from the midterms, and the Democratic ballot advantage has shrunk to six points over Republicans. Not ideal, though not a telltale sign of doom that many on the Left were jumping for glee about in January. Like anything in the Trump era, there are layers of nuance. While most people don’t like President Trump personally, his policies get high marks; Trump is scoring big on his handling of the economy. It presents quite the pickle for a swing voter. You might think Trump goes off half-cocked, trashing American allies and coming off as a buffoon, but his agenda has added more money in your pocket and created more economic opportunities for your community. Democrats, on the other hand, would kill an agenda that has produced some of the year’s best economic indicators in recent memory: three million jobs created unemployment rates at an 18-year low, and the highest consumer and small business confidence ratings in years. Can the Democratic agenda of high taxes and over-regulation yield a 5,000-point surge on the Dow, the largest annual gain in its history, by the way? No, not even close. The latest NBC News poll has the details for the ballot advantage:

The NBC/WSJ poll shows 49 percent of voters preferring a Democratic-controlled Congress as the outcome for November’s midterm elections, versus 43 percent who want Republicans to stay in charge.

That 6-point lead in congressional preference for Democrats is down from last month’s 10-point margin, 50 percent to 40 percent, though the difference is well within the survey’s margin of error.

Independent voters prefer a Democratic-controlled Congress by more than 20 points, 48 percent to 26 percent.

And Democrats continue to enjoy an enthusiasm advantage heading into the midterms: 65 percent of Democratic voters have a high level of interest in the upcoming elections — registering either a “9” or “10” on a 10-point scale — compared with 49 percent of GOP voters.

Yet, two things should make us skeptical of the poll data. NBC/WSJ is good, but let’s not forget that polling hasn’t had its best days in the sun. We see a significant voter enthusiasm gap between Democrats and Republicans, but the GOP support for Trump is solid—and that could provide a buffer for Republican candidates down ballot. The point is the president is driving voter enthusiasmon both sides, and it’s not necessarily lacklusterone way or the other—though at one point, GOP voter enthusiasm was registering higher than Democrats. It’s an ebb and flow. The Republican Party is far from entering a safe harbor in this cycle, though it’s marked improvement from the doom and gloom projections from last Christmas (via Politico):

The warning, several people close to the chairwoman said, reflected deepening anxiety that a full-throated Trump endorsement of accused child molester Roy Moore in the special election — which the president was edging closer to at the time — would further damage the party’s standing with women. McDaniel’s memo, which detailed the president's poor approval numbers among women nationally and in several states, would go unheeded, as Trump eventually went all-in for the ultimately unsuccessful Republican candidate.

The backstage talks provide a window into how those closest to Trump are bracing for a possible bloodbath in the 2018 midterms, which could obliterate the Republican congressional majorities and paralyze the president’s legislative agenda. The potential for a Democratic wave has grown after Republican losses this fall in Virginia, New Jersey and Alabama, and as the president’s approval ratings have plummeted to the 30s.

The generic ballot advantage was in the double-digits, and even members of the president’s own party were saying his managerial style—at the time—was not helping the casefor keeping the GOP in the majority. Democrats were gaining the edge. The 24-seatflip goal for Democrats also seemed more reachable with every passing GOP member of Congress announcing their retirement plans; that figure has soared past 40. It was kicked up a notch after the Trump tax cuts were passed, which did not just provide the foundation from which a wave of economic growth arose in the subsequent months, but also served as the date where the GOP became Trump’s party. The traditional conservative wing of the party, that had taken the helm since Goldwater, had lost. It was no longer a debate about who was the leader of the GOP concerning Trump or Speaker Paul Ryan. It was now Trump—and that’s not necessarily a bad thing since the Trump White House, with the exception of its tariff policy—has given the GOP almost everything they want.

Democrats made the calculation that the GOP tax bill would be an albatross around the party’s neck. Wrong—it’s benefitted over three million workers and 250 companies. Its effects are being felt—all of which are positive. In the meantime, red state Democrats have seen their approval ratings drop, creating the chance that the GOP could scalp a few seats and increase their majority in the Senate. Judge Brett Kavanaugh’s Supreme Court nomination seems to be their make-or-break vote. As for the GOP house races, they have a healthy war chest, a good record to point to, with some good legislative achievements, and a left wing lurch from Democrats to point to for a nice contrast. It’s a battle between a booming economy and economic misery being equally distributed, a battle between realism and lunacy—the far left’s rise within the Democratic Party is a gift to the GOP. Even on immigration, which has divided the GOP, the Democrats have done a good job highlighting the child separation policy for illegals that are arrested at the border. This is what happens. It’s a good policy, but that’s beside the point. Instead of keeping up the pressure, the far left wants…to abolish Immigration and Customs Enforcement. So the debate shifts towards security, which is in the GOP’s court.

Again, a lot could happen, but there’s more than enough time on the clock for things to change—and more than enough for the GOP to work with to stave off electoral disaster. We're 106 days away from Election Day. Be on the lookout as Democrats will try to make this cycle about health care as well, some have already made that pitch. Still, it doesn't negate the fact that the Democratic advantage has started to atrophy.