Eating Their Own: The Far Left's Abolish ICE Push Puts Bernie Sanders In The Crosshairs 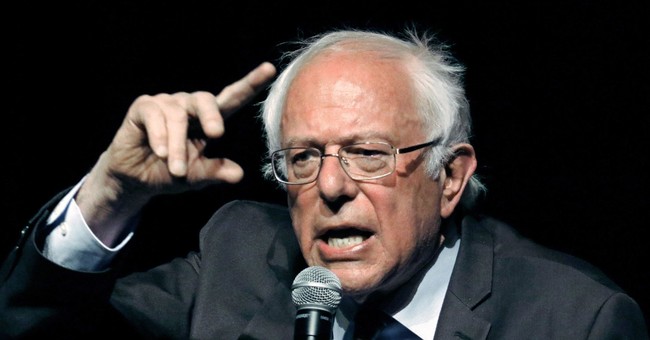 Sen. Bernie Sanders (I-VT) is considered to be the face of the far left within the Democratic Party. The self-described democratic socialist gave the establishment a run for their money, executing a better than anticipated primary challenge to Hillary Clinton during the 2016 election. Free college, single-payer health care, and boosting the minimum wage—all of which are economic disasters in waiting, but hey—it got the young folks energized. That development denied Clinton the ability to deliver a deathblow to Sanders early on in the primaries, as a core constituency of the Obama coalition firmly lined behind him. Mr. Sanders has been a top Trump critic; especially on the tax reform package that jumpstarted the economy. Yet, it looks like there’s one issue that might just might be a bridge too far for Sanders: abolish ICE. He wants to reorganize it, not something the far left darlings want to hear (via New Republic):

Come on man!” wrote Splinter news editor Jack Mirkinson. “Let’s hope that the next person who gets the chance asks him [Sanders] why he is still taking such a weak and morally timid position on ICE.” Jeremy Scahill, co-founder of The Intercept, wrote that “Sanders is choosing to be on the wrong side of history on this issue.”

Created in 2003 by President George W. Bush, ICE has become increasingly unpopular among Democrats as evidence of its abuses continues to grow. Congressman Earl Blumenauer, who voted against the agency’s creation, wrote in a Medium post on Sunday that it’s time to “abolish ICE and start over.” On Monday, Congressman Mark Pocan of Wisconsin formally introduced legislation to disband the agency. Insurgent left-wing candidates like Alexandria Ocasio-Cortez, who is challenging Congressman Joe Crowley, have already begun to campaign on the issue.

Ocasio-Cortez belongs to a cohort of Democratic candidates who have positions in common with Sanders: Medicare for All, free higher education, and a $15 minimum wage. But by seeming to support ICE’s continued existence, Sanders has put a wedge between himself and those seeking to pick up the torch he carried in 2016. In the process, he’s undermining his position as the nation’s most prominent left-wing politician.

It’s certainly true that Sanders is to the left of most Democrats. But contrary to how he’s often portrayed in the media, he is not a doctrinaire leftist. His principal benefit to the left has been to mainstream certain beliefs—namely, that access to health care, education, and living wages are rights, not luxuries. But Sanders is not a revolutionary. His views aren’t even entirely consistent with democratic socialism, the political tradition he claims. It’s one thing to call for breaking up the big banks, and quite another to call for the nationalization of private industries.

Sanders isn’t just to the right of the average American socialist; he’s to the right of Jeremy Corbyn, the leader of the U.K.’s Labour Party. While nationalization is a key pillar of the party’s platform, it is ground politicians in the United States still fear to tread. In similar fashion, Sanders has yet to put forward a coherent leftist vision for foreign policy, a needless failure considering socialism’s historical commitment to the prosperity of working people around the world.

Conventional wisdom: Bernie represents the left wing of the party

Truth: Bernie is a moderate who feuds with establishment figures in the party

bernie sanders is wrong for not calling to abolish ice.

Then Sanders is choosing to be on the wrong side of history on this issue. ICE was created under Bush-Cheney and has done what they wanted it to do, particularly under Trump. It can’t be reformed. https://t.co/xTyFYlMk4Q

Wow. Because Sanders is not full-blown abolish ICE, he’s out of the camp. That’s modern day progressivism for you. The chirping about tolerance is once again exposed as a façade. It’s you’ll either join us or die—literally. There can be no room for dissent because it’s morphed into an entirely authoritarian ethos, where if there is deviation on one issue—that person has to be ostracized. Granted, with Alexandria Ocasio-Cortez’s win in New York City and other up and coming socialists starting to stake their claim in the deep blue slices of America, there are more options, and they’re much younger than Bernie Sanders. Here’s what he wants to do with ICE, which was reported by VT Digger over Independence Day:

The Vermont independent said he supports restructuring Immigrations and Customs Enforcement and other agencies as part of a more comprehensive reform effort in a statement Tuesday.

He stopped short of calling for the agency to be fully abolished, a proposal that has gained steam among advocates and lawmakers on the left. Calls to dismantle ICE have mounted across the country in the wake of the Trump administration’s family separation policy, which has left hundreds of children stranded in detention centers without their parents.

Potential 2020 presidential hopefuls are joining the bandwagon. Sen. Elizabeth Warren, D-Mass., is among those who have endorsed the idea, while others, like Sen. Kamala Harris, D-Calif., said she sees a need to re-examine enforcement.

Will this become a litmus test for the Left? That remains to be seen, though the more top-level Democrats join this chorus, the greater chance that becomes, which is bad news for Bernie. Hesitation doesn’t look good and a zero hour flip-flop looks appallingly opportunistic. For the Democratic Party, it’s a race to see who can become the OG Trump-hating extremist and ingratiate themselves with the most radical, violent, and insane wings of the liberal movement. Abolish ICE is high on that list of to-do items for this cohort. Sanders’ refusal to get behind this from the get-go will probably not be forgotten (or forgiven), which means Democrats will shun a man who did just as well with white working class voters as Trump. Sanders could very well have beaten Trump in a general election. Maybe we’ll dodge a bullet and this kills his potential 2020 campaign, or maybe he won’t run at all due to his age. In all, it’s a bit amusing that after two years, Sanders goes from being the left wing alternative for liberals, buoyed by the energy of the grassroots, to someone who might be as soft as the political establishment and not really a left winger because he balked at getting behind the kill ICE push.

It’s funny. Democrats have an issue that divides the GOP like no other, but they're deciding to double-down on this abolish ICE nonsense that will shift the debate to security, which will yield a lot of political dividends for the GOP. Abolish ICE is now beginning to split the Democratic Party down the middle, which up until recently, was pretty united about family separation and other criticisms of the Trump administration’s immigration policy. Now, the far left is dragging them into a hole they may not be able to climb out of before the election.