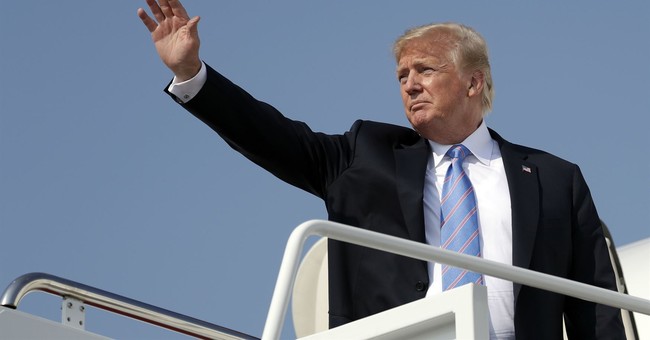 If Donald Trump wins the election, the stock market will collapse. He doesn’t have an agenda that can create jobs. You all heard the doomsday talk. In the end, three million jobs have been created since Trump was elected. The Dow Jones broke 26,000, and had a 5,000-point surgelast year—the largest annual gain ever. All told, the stock market has grown around 40 percent since Trump’s upset win over Hillary Clinton.

The tax reform package passed in 2017 has laid down a solid foundation for economic growth. Wages are growing. Consumer and small business confidence has reached its highest levels in 10+ years. Unemployment has reached an 18-year low, black unemployment has reached a historic low. The good economic news is pervasive and starting to make Democrats nervous, who thought the tax cuts would be an albatross around the GOP’s neck—wrong. Now, for the second quarter, the economic growth is project to hit four percent (via Atlanta Fed):

The GDPNow model estimate for real GDP growth (seasonally adjusted annual rate) in the second quarter of 2018 is 4.1 percent on July 2, up from 3.8 percent on June 29. After this morning's construction spending report from the U.S. Census Bureau, the nowcast of second-quarter real government spending growth increased from 0.8 percent to 1.6 percent, while the nowcast of second-quarter real nonresidential structures investment growth decreased from 7.6 percent to 5.3 percent. The nowcasts of second-quarter real consumer spending growth and second-quarter real nonresidential equipment investment growth increased from 2.7 percent and 4.0 percent, respectively, to 2.9 percent and 4.8 percent, respectively, after this morning's Manufacturing ISM Report On Business from the Institute for Supply Management. The model's estimate of the dynamic factor for June—normalized to have mean 0 and standard deviation 1 and used to forecast the yet-to-be released monthly GDP source data—increased from 0.15 to 0.77 after the ISM report this morning.