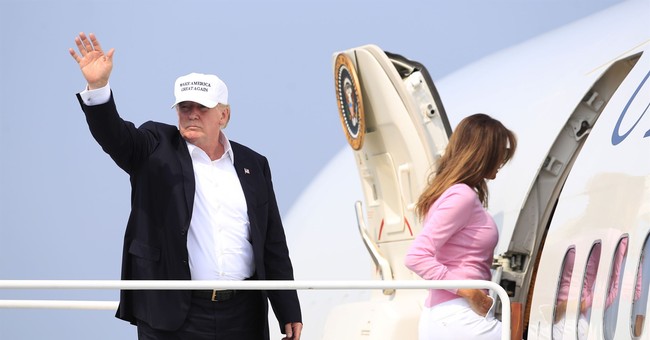 Well, the Trump White House has another chapter of good news for its immigration policy: more voters want a merit-based system. Now, for months polls have shown that voters are warm to this shift, which has even captured the support of 72 percent of Hispanic voters. One cannot forget the media’s absurd reaction to this announcement, which led to this epic showdown between CNN’s Jim Acosta and White House Senior Adviser Stephen Miller last August. To make a long story short, Miller took Acosta to the woodshed—and it wouldn’t be the first time Trump officials have straight up owned CNN for their serial errors in covering this White House.

Rasmussen’s latest poll shows that support for merit-based immigration has not changed:

This weekend, Americans nationwide protested against the separation of immigrant families at the U.S.-Mexico border. Despite outrage over the current border crisis, more voters now think a merit-based immigration system should win out over the current family-based one.

A new Rasmussen Reports national telephone and online survey finds that 50% of Likely U.S. Voters now favor moving to a merit-based system for legal immigration that brings in legal immigrants based on their skills. Support for merit-based immigration has been on the rise since President Trump first proposed it in April of last year.  Thirty-four percent (34%) of voters prefer to keep the existing family-based system, showing little change from previous surveys, but 16% are undecided.

To counter Democratic attacks that this change in immigration policy is racist or not compassionate, circle back to this CNBC piece by Jake Novak, where he makes an argument on how merit-based immigration might not only be compassionate as well, but also a national priority:

Perhaps that argument could best be made by the growing number of experts warning the nation about the dangerous scenario we're facing with an aging population and fewer primary care doctors to treat them. A report released in March by the Association of American Medical Colleges estimate that there could be a shortage of as many as 43,100 primary care physicians by 2030. The reason is simple in that it costs so much money, time, and effort to become a primary care doctor, and the pay is relatively low compared to those costs. Merit-based immigration policies can make a major dent in this area, especially since so many foreign-born and foreign-trained doctors don't carry massive student debt and many of the other financial barriers to entry to medicine native-born Americans do. This one argument alone should be at the forefront of any merit-based immigration policy, as the specter of millions of Americans unable to even find a doctor when they need one ranks pretty high on the "compassionate reasons meter."

Of course, the medical needs are just the low-hanging fruit. It will take a little more political and messaging skill to explain why refocusing our immigration policies to bring in more technically-skilled workers is more compassionate for the entire country. But, indeed, it is. The first part of the argument is that if U.S.-based companies cannot fill the growing number of hard-to-fill tech jobs, they will have the natural inclination to move overseas or go out of business entirely.

The second part of the argument gets us closer to the compassion theme. That's the argument that unfilled tech jobs will have an impact on other businesses that cater to tech companies and their employees. Think about it: Every empty desk or office at a tech company is one less employee buying work clothes, grabbing lunch at the fast-food place at the corner, or taking an Uber home. In fact, according to Glassdoor Chief Economist Andrew Chamberlain, the overall value to our broader economy of the approximately 263,586 unfilled IT jobs posted by employers in the U.S. adds up to $20.1 billion. That's a lot of compassion.

If the proponents of our current family-based immigration policy believe they own the compassion card, they need to explain why importing millions of unskilled immigrants into this country without a corresponding number of higher-paid skilled people to provide them with work opportunities is so compassionate. And they also need to explain why it would be compassionate to add to the growing number of Americans of all kinds struggling to find a doctor.

Republicans need to get better at the messaging. Right now, two things are keeping us on track: President Trump’s efficient use of the bully pulpit and Democratic hysteria driving them into the extremes national policy. They can’t bank on that alone.