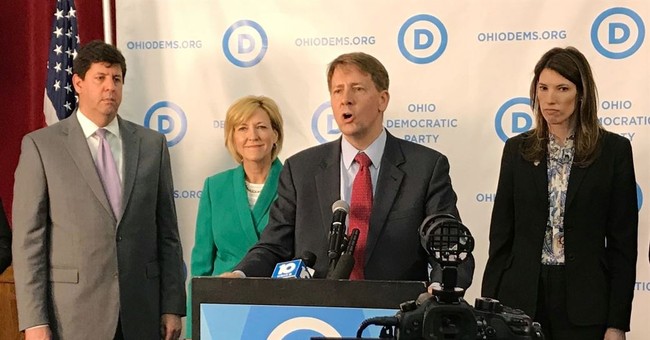 So, is this the let’s increase our chances of losing an election page of the Cordray playbook? Richard Cordray, the former director of the Consumer Financial Protection Bureau, really didn’t hide the fact that he was going to return to the Buckeye State to run for governor. He’s left the CFPB and now he’s off to the races, saying that Ohio GOP lawmakers are…Nazi collaborators? Apparently, this stems from a budget cut from 2011 in which Republican state lawmakers didn’t do enough to push back, or something. That totally makes them Nazi collaborators (via Cincinnati Enquirer):

Let's get this straight: If you're a locally elected Republican official in Ohio and you don't publicly stand up to Gov. Kasich and legislature over local government fund cuts, you're like a Nazi collaborator. That's some twisted logic right there. ??https://t.co/Lg9ZHnaWWd

Cordray made the comparison while criticizing Republicans statewide for not standing up to GOP Gov. John Kasich and the legislature for making cuts to the local government fund in 2011.

Working together to solve problems has not been the "philosophy" of Gov. Kasich and statehouse Republicans, Cordray said, according to the 45-second video. Cordray questions why locally elected Republicans across the state aren't "speaking up about this."

Cordray then added: "Somebody said to me last month that they’re 'Vichy Republicans,' which I didn’t fully understand. I guess that’s 'Vichy France' during World War II, the ones who went over and collaborated with the Nazis."

Standing next to a decorative wreath hanging on a wall, Cordray raised both hands as he said "Vichy Republicans." A few people in the audience could be heard chuckling.

Cordray did not mention Trump, whose critics have likened him to a Nazi.

Mike Gwin, Cordray’s spokesman said, “Rich believes Ohioans deserve elected representatives who will stand up for what's right, even if that means speaking out against people of their own party. He regrets repeating someone else's inappropriate comparison in making that point."

Well, obviously not because he made another Nazi comparison at a campaign stop in Newark, Ohio this month (via Free Beacon):

The comments from Cordray, the Democratic gubernatorial nominee in Ohio, came while speaking to supporters during a campaign stop on June 15 with the Licking County Democrats in Newark, Ohio.

"I will say, that as I said, the tone that you set in government and leadership matters," Cordray said. "I mean, right now we have a tone being set by the White House, which is absolutely against everything I’ve understood for America. You know, trying to find people to scapegoat and blame? That’s like Nazi Germany."

"I mean, I don’t want to make too strong a point about it, and I don’t want to compare it to the Holocaust, but it is trying to find people that we can knock down and drag down and blame and say, ‘it’s their fault, not our fault,'" Cordray said. "That never builds people up, to knock somebody else down. When our kids do it on the playground, we tell them, ‘stop that.’"

It’s not in the GOP’s interest, but just stop with these shoddy, ill-executed, and historically illiterate swipes, Rich. They’re a total disaster. They’re low energy. And they’re the epitome of half-assed. The Left has beaten the Nazi thing to death. If you’re for middle class tax relief, you’re a Nazi. If you want strong borders, you’re a Nazi. If you voted for Trump, you’re a Nazi. We’re all deplorable—and we still won in 2016, and in a state, where Donald Trump trounced Hillary Clinton. I’m not so sure this is the right line of attack. The Cincinnati Enquirer editorial board recently wrote that Cordray should probably ditch this line as well, noting that it’s quite possible nothing comes of it—or it becomes something that remain in the cycle for weeks on end, likening it to Romney’s 47 percent remark—or more aptly the Bain Capital ad that marinated in the Akron area.

Yet, it seems the apple doesn’t fall too far from the tree on Ohio Democrats and their penchant for making Nazi references. In 2011, Sen. Sherrod Brown (D-OH) compared the GOP effort to rein in union as a Hitler-esque political maneuver (via The Hill 3/3/11):

Brown said that unions have wrongly come under attack from Republicans and conservatives, who are pitting workers against one another in states like his, where governments are taking action on anti-union legislation. Though he said he was not making a direct comparison, Brown claimed that "some of the worst governments we've ever had" have opposed labor unions.

And it only took 24 hours for Brownie to apologize. Now, all that being said, Democrats will probably continue to make them, so grab some popcorn as they all walk into the meat grinder on this.