Actor Who Said Barron Trump Should Be Caged With Pedophiles Apologizes 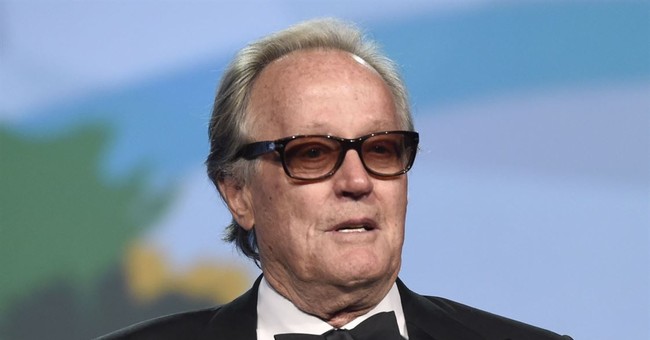 Okay—I’m obviously not a baby boomer, but I know who Peter Fonda is. He’s the brother of  “Hanoi Jane” Fonda, another actress, and the father of Bridget Fonda, who—you guessed it—is a former actress. He was part of the counterculture. He’s known for a variety of films, like Easy Rider, which started the late Dennis Hopper and Jack Nicholson. He’s also known for Ulee’s Gold. He famously dropped acid with The Beatles’ John Lennon and boom; She Said, She Said was born for the Revolver album. Well, Mr. Fonda landed himself into some serious hot water when he went on a tweet storm, uttering almost every profanity under the sun—while adding that he felt Barron Trump, son of President Donald Trump, should essentially be kidnapped and tossed into a cage with pedophiles. Lauretta covered this yesterday.

This is just... What the fuck? pic.twitter.com/H4nDPQzsTr

Oh yes, you bet the Secret Service was notified of this activity. Fonda also said that Press Secretary Sarah Sanders was “worse than a c**t,” calling her and Department of Homeland Security Secretary Kristjen Nielsen a “g***,” which he says is worse than the c-word. Fonda is due to appear in the upcoming Jack Ryan series on Amazon Prime and in a new film called Boundaries. He will not be fired from the latter project (shocker!), with Sony citing his small role. He won’t be Kevin Spacey’d, who was completely cut out of the movie All The Money In The World; Christopher Plummer reshoot all his scenes after sexual misconduct allegations surfaced against Spacey. Fonda did apologize for the tweets against Barron (via LA Times):

The “Easy Rider” actor — who has a movie coming out Friday — has taken down the all-caps post, which he sent to his roughly 50,000 followers around 2 a.m. Wednesday morning.

“I tweeted something highly inappropriate and vulgar about the president and his family in response to the devastating images I was seeing on television,” Fonda, 78, said Wednesday via his rep. “Like many Americans, I am very impassioned and distraught over the situation with children separated from their families at the border, but I went way too far.”

The apology came shortly after President Trump signed an executive order to end a six-week-old policy of family separations at the southern U.S. border.

The tweet, Fonda continued, “was wrong and I should not have done it.

I immediately regretted it and sincerely apologize to the family for what I said and any hurt my words have caused.”

Here’s Sony statement on the matter:

Peter Fonda’s comments are abhorrent, reckless and dangerous, and we condemn them completely,” read the statement. “It is important to note that Mr. Fonda plays a very minor role in the film. To pull or alter this film at this point would unfairly penalize the filmmaker Shana Feste’s accomplishment, the many actors, crew members and other creative talent that worked hard on the project.

This is the Left, guys. This is how they feel. This is how they think. It’s not just a Hollywood Left outlier. They’ve ventured into this dark corner. Fonda is sorry? Oh please—he didn’t immediately regret it. He apologized because the focus would have turned away from the border and redirected at him and how detached and terrible the Hollywood progressive cesspool has become. Left-wingers hate the president. This was not over the line for them. This was done just to keep the narrative from being torpedoed. Also, if you get like this over an issue and you’re go-to tweet is hoping the First Family gets devastated with their son thrown into a cage with a bunch of pedophiles, then stay the hell off Twitter.

Also, where is the apology to Ms. Sanders and Ms. Nielsen? Don't hold your breath on that one, folks.