ICYMI: An Amy Officer Stole An Armored Vehicle And Led Police On A Chase Down I-95 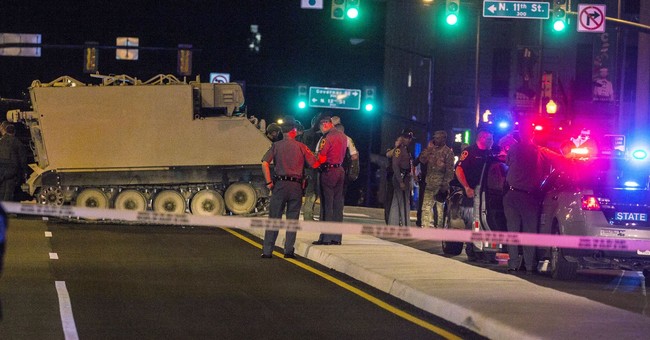 On June 5, an Army officer decided to steal an armored vehicle for a spin, which lead to police giving chase around the Richmond area.  First Lt. Joshua Philip Yabut decided around 8 P.M. that night to just get into the M577 armored carrier and drive off at Fort Pickett. Yabut is also a former NASA researcher. He was reportedly under the influence of narcotics when he decided to go on this joy ride that blessedly ended with no fatalities. The M577 carries no weapons, though authorities said Yabut had his service firearm on his person, but no ammunition (via NBC Washington):

Police are chasing a stolen tank in Virginia. pic.twitter.com/5Kbvui3Uuf

This is INSANE! Someone has hijacked a “Tank-like” vehicle from Fort Pickett and just drove it by our apartment! This is on Broad Street in the Fan. pic.twitter.com/EYfhFux1dk

A Virginia National Guard soldier who stole an armored personnel carrier and led police on a more than 60-mile chase through central Virginia was under the influence of drugs, authorities say.

Joshua Philip Yabut, 29, of Richmond got inside an M577 armored personnel vehicle and drove away from Fort Pickett in Nottoway County about 7:50 p.m. Tuesday, police said. Fort Pickett is home to the National Guard's Maneuver Training Center, according to the military installation's website.

Police pursued Yabut as he drove east along Route 460 and onto Interstate 95 north toward Richmond. The chase ended along Broad Street — a main thoroughfare for traffic in Richmond.

The vehicle topped out at 45 mph, police said. The vehicle was not equipped with weapons, but the National Guard says Yabut did have his personal weapon with no ammunition.

Minutes after police began their pursuit shortly before 8 p.m., Yabut posted a photo and video of himself in what appears to be the stolen vehicle.

He wrote a series of odd tweets Tuesday, including: "where is this damn water buffalo" "all i wanna do is get an anime wife'' and "wow I think I just discovered a large illegal spy operation in the us government."

Yabut is being charged with driving under the influence, evading law enforcement, and unauthorized use of a vehicle. He could face up to five years in prison for this stunt.